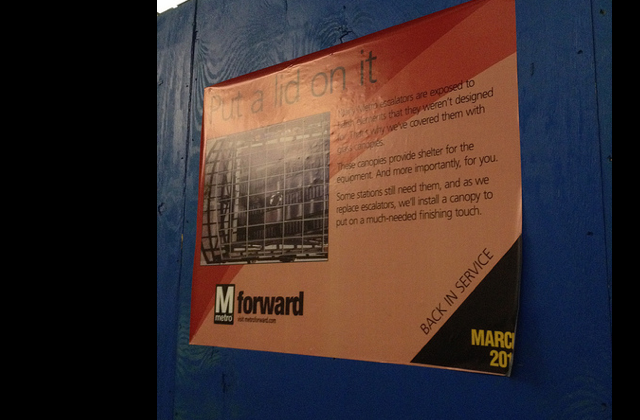 Metro has been working on an escalator in the Columbia Heights station for a while, and I finally read the sign they put up. This escalator is between the train platform and the next level up. It is 100% underground, which makes the sign pretty confusing. Does Metro really plan to put a glass canopy over an underground escalator to protect it from the elements, or did they think they needed to put up a sign to inform riders of what they’re doing, without pausing to check whether the sign provides accurate information?

Many Metro escalators are exposed to harsh elements that they weren’t designed for. That’s why we’ve covered them with glass canopies.

These canopies provide shelter for the equipment. And more importantly, for you.
Some stations still need them, and as we replace escalators, we’ll install a canopy to put on a much-needed finishing touch.”

Hahaha they put the same sign on an underground escalator they are working on at the Petworth metro too. My guess is they just ran out of signs explaining the work they were doing and had extras of these and said ‘screw it, this’ll work…’