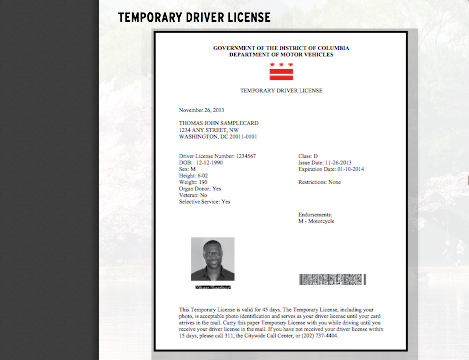 I was trying to rent a car with the new temporary license the DMV emails residents while processing our new permanent licenses. It’s a paper printout, but that’s how the new system works. But the car rental says it’s not a real license and they can’t accept it — the manager of a CAR RENTAL OFFICE had NO IDEA that the District changed it’s system last month. Thankfully after I stood on the sidewalk in tears for an hour they rented the car to me. One of the 311 operators I spoke to said they’ve been getting a lot of complaints from people experiencing the same problem. And a customer who watched the ordeal unfold told me his friend had the same issue last week. So if anyone out there does want to rent, they might want to hold off on converting their out-of-state license.”

Ed. Note: Last week we looked at the new DC Drivers Licenses and learned: “You will receive a temporary license or identification card valid for 45 days, and the new credential will be mailed to you.