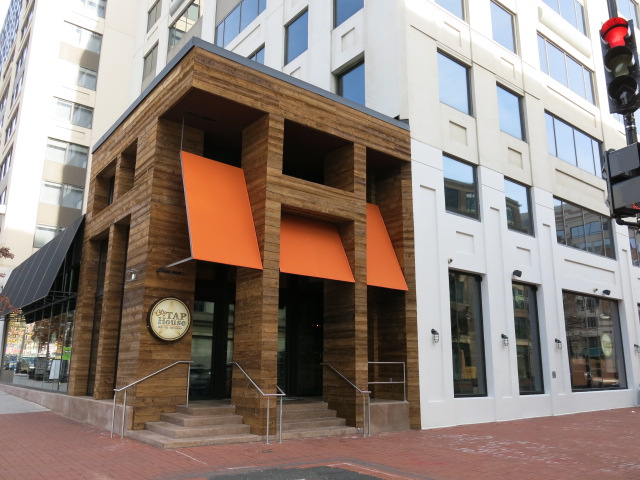 City Tap House DC is located in the former 901 Restaurant space. You can see their dinner menu here.

“Owner Frank Falesto is giving DC foodies one more reason to dine at the highly anticipated restaurant City Tap House DC at 901 9th Street, NW, Washington, DC, 20001, adjacent to the new City Center. The beer centric restaurant will serve refined American pub fare for lunch, dinner and weekend brunch on Saturday and Sunday. City Tap House has also tapped Andy Farrell as Beer Director of its enticing program. Guests can anticipate over 40 beer lines and two beer engines which will afford the new restaurant the opportunity to feature over 60 different local, domestic and European craft beers available by the draft and bottle. A variety of seasonal and special edition releases will be available throughout the year. Prices range from $6 to $10 for draft and will vary by the bottle based on format, and for wine and cocktail fans, an international and eclectic selection of wine and handcrafted libations will also be available.

The wealth of great local and regional breweries gives City Tap House great sourcing opportunities for creating outstanding events, and for putting its philosophy on craft beer into motion. “The beer program is at the heart of what we offers our valued guests,” says Andy Farrell. “We want it to be approachable, unpretentious and community driven. We strive for our guests to have a well-rounded dining experience using beer and food to elevate each other. Dining at City Tap House should be about discovery and good times shared with good people.”

City Tap House will rely on keeping a portion of its list standard, emphasizing brands it feels are the benchmark in particular styles including Allagash, Weinhenstephaner, St. Feuillien, and Sierra Nevada. The balance of Farrell’s list will be a mix of local staples like Three Stars, DC Brau and Mad Fox, as well as domestic and European craft stalwarts such as Founder’s, Bell’s, Bosteels, Schneider, & Goose Island. Part of City Tap House’s mission is to tirelessly seek out the newest and most exciting breweries available in the ever-evolving craft beer market. City Tap House looks forward to becoming part of DC’s emerging identity as a great craft beer town; looks forward to serving up wonderful fare and events to match the energy and fun of the suds poured.

Farrell wants to continue the Philadelphia location’s credo as a craft bar that not only engages guest, but local brewers as well, in fun events. “We want to be a place that local and visiting brewers from around the country are able to show off their best stuff and try off the wall ideas, engage our guests with exceptional beverage paired with great food. At the end of the day, it’s about having a good time….there’s got to be some whimsy in what we do.”

City Tap House’s Beer Director Andy Farrell brings fifteen years of experience to restaurant combining seven years of chef experience in Italian, Latin, American regional and steakhouse venues. He also has extensive bar training and will be testing to receive his Cicerone certification in January 2014. Prior to opening City Tap House Philadelphia in May 2010, Farrell served as operating partner at Bridgid’s in Philadelphia, a craft stahlwart recognized as one of Philadelphia’s first establishment to specialize in Belgian beers. In September 2013, Andy got the opportunity to attend Sierra Nevada Beer Camp, assisting in the brewing of a Munich Dunkel Lager. Farrell is excited to bring his expertise to the booming microbrew scene in Washington, DC, and will oversee the development of the cocktail and beer program. A proud Philadelphia native, Andy enjoys spending quality time with his wife Maureen and two young children, Jack and Maggie.