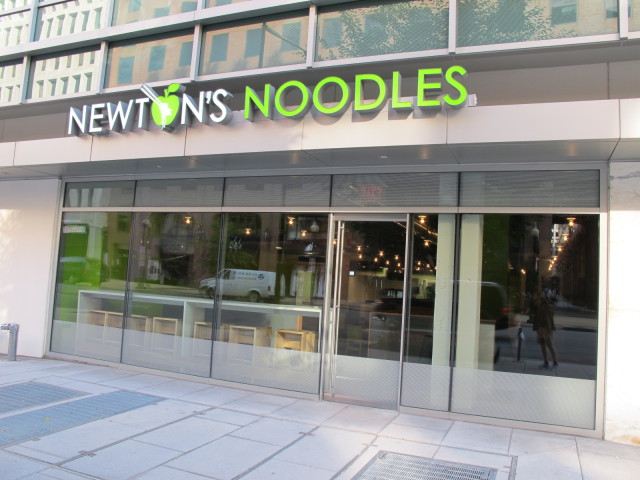 In the beginning of the week we learned that Newton’s Noodles hoped to open this week pending DCRA approval. They got it. From a press release:

Friedman created his signature fuzu (shrimp, scallops, chicken, egg, carrots, snowpeas, onions, bean sprouts, scallions, crispy shallots and black sesame) on his first day as an executive chef and later brought it to Newton’s Table, where it gained a formidable critical and popular following. The dish serves as the foundation of the Newton’s Noodles menu: guests can order the original or customize with their choice of noodle, protein, sauce and vegetables. And, all varieties of the made-to-order fuzu will be prepared using all-natural, locally-sourced ingredients prepared at a speedy clip. Friedman has perfected the dish throughout his tenure at both restaurants, a taste he describes as “the perfect mix of salty and sweet, with a touch of heat.”

The Dupont eatery will feature an expansive 70-seat interior as well as a 40-seat patio, both of which incorporate modern, sustainable design elements. All-natural materials like wormy maple wood and recycled leather constitute the walls and furnishings, and dozens of single lightbulbs and wooden clouds hang from exposed ducting the open-air ceilings. The layout allows small and large parties to move easily throughout, and high-tech touches like digital menu boards streamline the ordering process.”

more stories
Previous
Nevermind the Mountain Lion Sightings, “a (deer) buck can and will stomp and possibly kill your pet”
Next
Have a Look at the Coolest New Restaurant on Capitol Hill – Rose’s Luxury