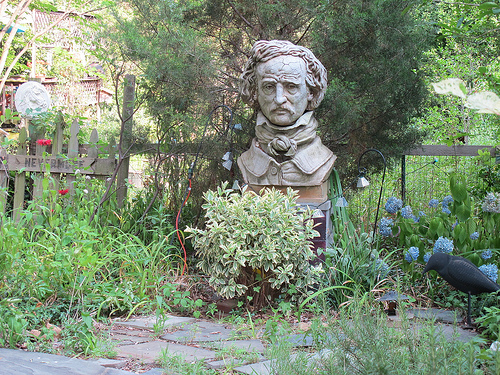 “Les Dames d’Escoffier and the region’s most creative bartenders present the barhopping fundraiser, Craft Spirit of Poe on Monday, October 7. Each participating bar will host a mini- lecture on the anniversary of Edgar Allen Poe’s death and commemorate his spirit and his love of spirits with a Poe inspire cocktail.

In Cleveland Park, Ripple Bar Manager Caroline Blundell has created “The Raven’s Claw,” for the occasion; a drink inspired by the writer’s famous poem, “The Raven” and the lesser known tale of love lost, “Annabel Lee.” The concoction will be made with one of the original bourbons of the U.S., something Poe himself might have drank while drowning his well documented sorrows.

As part of the event, Ripple will host American University scholar of literature Courtney Wells for a brief discussions on the poet’s life and times as well as the poems that inspired Blundell’s cocktail.

With the purchase of up to three tickets, guests can attend a lecture and receive a drink at the bar of their choice, then proceed on to other participating bars to trade remaining tickets for more Poe inspired drinks.

Daikaya, Hank’s Oyster Bar, Room 11, The Gibson, The Green Pig, Vinoteca, and 8407 Kitchen & Bar will offer similar mini-lectures and drinks inspired by Poe’s “Metzengerstein,” “Casque of Amontillado,” “Masque of Red Death,” “The Black Cat,” “In the Devil’s Chair,””Nevermore” and “Alone.” What better way to learn poetry than by associating it with a delicious hand crafted cocktail?

Tickets can be bought online at www.craftspiritofpoe.com and proceeds will help fund scholarships for local culinary talent, a Les Dames d’Escoffier initiative.”