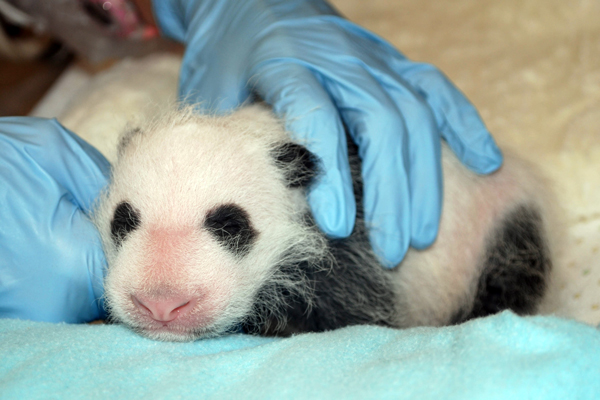 “The giant panda cub born at the Smithsonian’s National Zoo Aug. 23 received her first veterinary exam late yesterday afternoon and was given a clean bill of health. Mei Xiang, who has spent much of the past three and a half weeks cradling her cub, put her down and left her den at 4:11 p.m. The panda team, which has been preparing for an opportunity to perform a full veterinary exam, seized the opportunity and retrieved the cub from the den while Mei Xiang ate bamboo and drank some water in the adjacent enclosure. The exam was completed by 4:31 p.m.

“It’s amazing to see how much she has grown in less than one month,” said Brandie Smith, senior curator of mammals and giant pandas. “Mei Xiang continues to be a great mom, as she was with Tai Shan, and it shows.”

Since her preliminary health check Aug. 25 the cub has more than doubled her weight. She now weighs slightly less than two pounds and has the signature black markings of a giant panda. Veterinarians also listened to her heart and lungs. Her heart rate was 130 beats per minute, and her respiratory rate was 42. From nose to tail she is 10.6 inches long and 9.8 inches wide around her belly. Her eyes have not opened yet.

After the exam was completed Mei Xiang returned to her den and immediately picked up her cub and began grooming her.”

Read more →
More Stories
Fire at Georgia and Lamont Street, NWFire and Ice Closes in Union Station, Possibly to be Replaced with an Aveda Salon