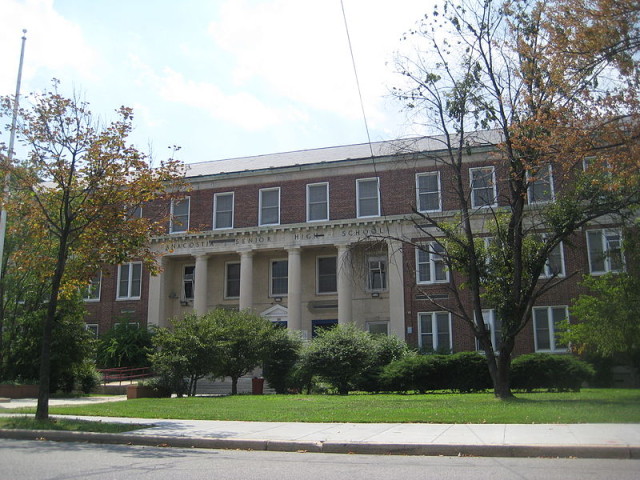 Travis was touched by your positive comments, and, yes, there will be some editing and paring down of his magnus opus!

Before I knew it, I had semi-adopted two teenage brothers who live two blocks away.  I first knew the older boy, identified as a top math student for our MATHlete program two years ago.   He is now an eleventh grader, and his brother is now a ninth grader.  When I moved into Anacostia last winter, I knew I would be closer to my students, but I didn’t know how close.

The relationship changed from merely student-teacher when the older one kept texting me that there wasn’t any food in their house, and could they come over.  Feeding picky teenagers is a new challenge for me, as my diet ranges from the Moosewood Cookbook to the Vegetarian Epicure with a little beer or wine thrown in occasionally.  Except for the Caesar’s salad (a “black” salad, the older boy jokes), I have not been able to get them to eat vegetables.

There is no TV or cable where the boys live, just two bedrooms for mom and seven children.  I have watched more BET in the last year than in the rest if my lifetime.  OTOH I have taught them both how to use Google as aresearch tool.  I have turned the older boy into a Nationals fan, which I consider a personal triumph.  I have gotten him eyeglasses, which he didn’t have for five years, while he couldn’t even see the board while squinting.  I have talked him in to staying with his high school football team, when he was dead set on quitting.  Now he wants to keep playing sports to stay eligible for football next year.  I am helping the younger boy, a 15-year old reading at a third grade level, with his homework every night.

What are the boys like?  They are smart, funny, football fanatics–one Redskins, the other Cowboys–and they make great decisions every day as they walk through a neighborhood filled with trash and not a lot of hope.

Fortunately the younger boy qualifies for a new tutoring program RICH is running at Anacostia High School for freshmen who are 5+ grade levels behind in their reading level.  I have been able to help him enough with his homework so he might even make the honor roll second quarter, which would be great for him but a strange statement for a system that promotes, year after year, kids who can’t read.

The boys and I discuss incentives like a cell phone or an IPod.  We go shopping for clothes they pay part of through their work around the house or if they learn a certain number of SAT vocabulary words.  We talk about learning how to drive on my car.  They go home every night at 10 or 11 pm, but they have become my surrogate sons.  I have taken them to Gettysburg, Philadelphia, New York City, and the Delaware beach.

Last June, the day before Father’s Day, the two boys, their older sister and female cousin all went with me to wait in line three hours before a Yankees-Nationals game.  When we finally walked through the main gate, we were a magnet for the Nationals’ photographers, who always ask for a picture when I come in with black children.  The next day, I looked up the picture on the web site.  Our photo, like all the rest, had a caption underneath with the words, “Happy Father’s Day.”  I can’t imagine the range of emotions each of them has on Father’s Day.  None of the seven children in the two boys’ family, nor the eight children in the cousin’s family, knows their father.  I told the two boys on Father’s Day I would be proud to have them as sons, although I realize I can never fully replace their father and completely fill the void in their heart.  They were grateful and are always grateful.

I can count on one hand the number of children we work with at Anacostia who has a meaningful relationship with their biological father.  These students have become the kids who were left behind, another reason Anacostia is thought to be a bottom feeder in D.C.’s public school system.  Their emotional and cognitive needs at times seem overwhelming.  Fortunately we have some tutors for RICH who aren’t going anywhere, and we can make a difference for those hearts we do touch.

Postscript:  The older boy is a senior now, and like Travis is in RICH’s college prep program.  I took the two brothers and Travis to the beach over Father’s Day Weekend.  To the three boys, Father’s Day is a painful reminder.  Travis’s father and the younger brother’s father were murdered, and the older brother’s father (they share the same mother but not the same father) is alive but is never around, a scenario more painful, in some ways, than having a murdered dad.

As I write this, I’m helping a 16-year old fatherless boy on the computer next to me write his first resume.  A gifted cook, he has a boy on the way and wants to get a job in a restaurant.  RICH will also be giving him incentives to earn good grades in school.