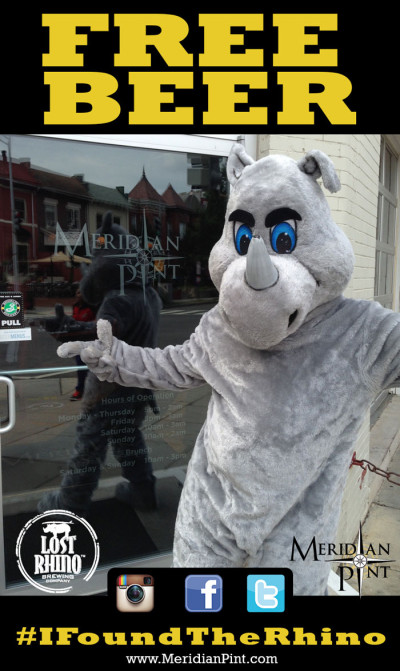 From the folks at Meridian Pint:

Meridian Pint is partnering with Lost Rhino for a week-long DC Beer Week event to find the Rhino. The “Lost Rhino” has wandered all the way from Ashburn, VA and is now romping the streets of the District trying to find his crash. He will be in different neighborhoods all week checking out some of DC’s best spots. Follow Meridian Pint’s Twitter or Facebook for times and neighborhoods that the Rhino will be visiting.

The Rhino isn’t shy; take a picture with him with the hash tag #IfoundtheRhino and post it to the Pint’s Twitter, Facebook, or Instagram account! We will pick one picture everyday from Monday, August 12th to Friday, August 16th. Each picture that we pick will be the daily winner! Winners will be announced by 7pm and will receive FREE DRAFT BEER for the day that they won AND for the remainder of DC Beer Week!

Happy hunting and remember, everyone loves the Rhino!”

Read more →
More Stories
LOOK Restaurant Getting a New Look on K Street, Will Close for a Redesign by a Food Network TV Show, Reopening mid-SeptemberSpeaking of DC Beer Week – Check Out the Preview Photos Posted by Bluejacket Brewpub Coming to Navy Yard in Sept.