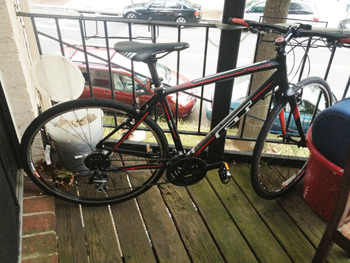 My bike was stolen at some point this week off of my second story balcony. No, it wasn’t locked, but I really never would have thought someone would scale a building, active the motion censored lights, right in front of windows, hop onto a balcony, throw the thing down and ride off with it… boy was I wrong. The bike is registered, I have proof of purchase and a police report has been filed.

I’ve contacted all of the bike shops in the area to let them know that it is stolen and to report if someone comes in trying to sell it. I’ve scoured Craigslist every day but have had no luck. Considering the circumstances, the bike is probably floating around somewhere in DC…

There is a reward for whoever finds/returns it.”