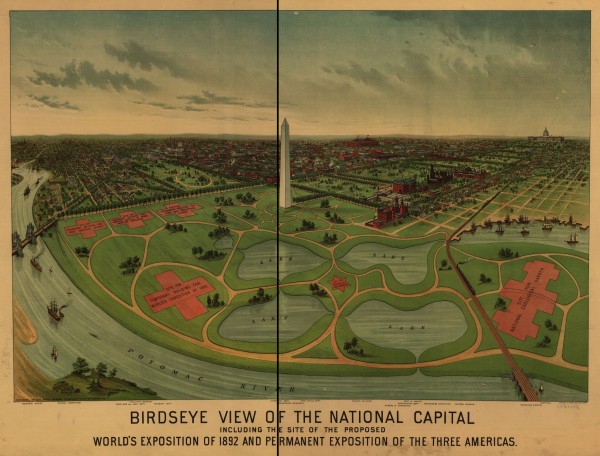 Map of the Week is written by David A., a systems librarian and map geek living in NoMa. David previously wrote about the Potomac River from 1861.

Title: Birdseye view of the National Capital, including the site of the proposed World’s Exposition of 1892 and Permanent Exposition of the Three Americas 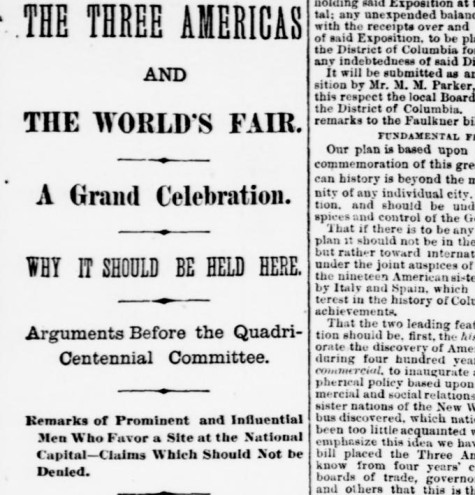 I really like this 1888 bird’s-eye view of the National Mall and surrounding area. This map laid out plans for a permanent exposition and a world’s fair to celebrate the centennial of the U.S. Constitution and the 400th anniversary of Christopher Columbus’ arrival. Some interesting details include old-timey ships on the SW Waterfront, a presumably never-built tower bridge across the Potomac, a Star of David-shaped monument to Columbus and a strangely empty street grid in SW. Proponents made their case for a Washington-hosted world’s fair in a January 18, 1890 issue of the Evening Star newspaper. They were unsuccessful. Chicago ended up hosting a quadricentennial world’s fair in 1893 to great acclaim.