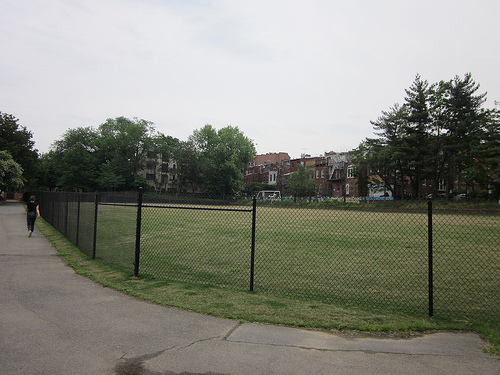 On Thursday, May 23, 2013 around 11:40am a call came in about a couple of snakes that fell out of the trees. When the snakes fell they scared the children, and everyone fled. This was in the playground area. I responded but found no snakes. I caught one small enough to fit inside an empty water bottle I had. It was probably a black rat snake. They are indigenous to trees and the warm weather is drawing them out.

But fear not the National Zoo says:

Common rat snakes tend to be shy and, if possible, will avoid being confronted. If these snakes are seen and confronted by danger, they tend to freeze and remain motionless. Some adults attempt to protect themselves. They coil their body and vibrate their tails in dead leaves to simulate a rattle. If the snakes continue to be provoked, they will strike.

Though the National Wildlife Federation cautions: