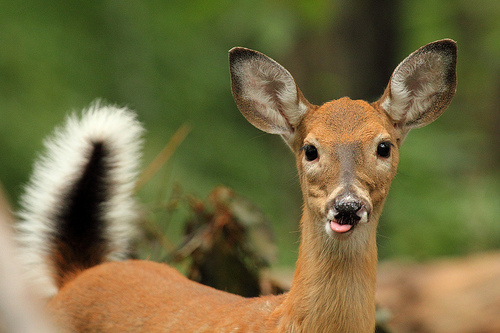 The following has been circulating on all the neighborhood listservs:

I am proud to be one of five local plaintiffs in a lawsuit opposing the National Park Service’s barbaric plan to kill deer in Rock Creek Park. The plan is on hold until the lawsuit is heard in court. Please see the email below and voice your support for our work by signing our petition at the link provided below.

1) An excellent opinion piece promoting contraception for the Rock Creek Park deer was published in the Feb. 3, 2013 edition of The Washington Post by two eminent scientists in the field of wildlife population control. It can be read here:

2) A petition asking the National Park Service to use only non-lethal methods, including contraception, to control the deer population in Rock Creek National Park has been posted on Change.Org

We hope you will sign it and forward it on to others in the area, across the country, and around the world.

You can also type in a message as to why you support the petition. You’re not required to leave a comment, however.

The petition is written for:

– those who think that humans should strive to live in peaceful co-existence with the beautiful wildlife in our midst.

– those who think that the future of wildlife population control is the use of fertility-control agents — not death and destruction without end.

– those who oppose the National Park Service’s plan to terrorize and brutalize our wonderful Rock Creek Park deer.

Ignoring federal law and its own rules — and for the first time in the 123-year history of the park — the National Park Service has ordered the killing of animals who live in Rock Creek Park. The Park Service plans to kill half of the park’s 314 deer in the first year of a multi-year killing program.

These gentle animals, who have never before been harassed or hunted, will be shot with bullets and arrows after being lured to piles of grain, apples, and hay; others will be killed after capturing them with nets and shooting them in the head with penetrating captive-bolt guns, or by being bled to death.

To those who think this is wrong — we hope you will sign the petition.

On the Takoma listserv one resident left the following response:

How do you feel about the idea deer having to wander further afield in search of food and get hit by cars?

Or slowly starve to death as they continue to wipe out all the foliage in Rock Creek Park due to their over-population?

What are you proposing to do about that? Contraception for the deer is a great idea for long-term over-population, but it doesn’t solve the problem of the deer — which are NOT native to the area — which are already there and causing problems to both the park and the surrounding neighborhoods.