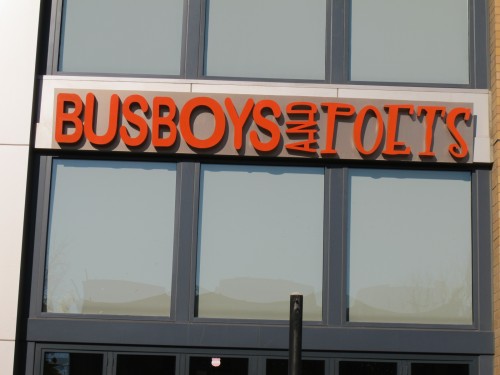 Back in Dec. 2012 I shared some scuttlebutt that a Busboys and Poets would be coming to the new Takoma Central project at 235 Carroll Street, NW. Happy to report it’s been confirmed. The Post’s Jonathan O’Connell reports they’re shooting to open in Spring 2014. From a press release:

Federal Capital Partners (FCP) and Level 2 Development (Level 2) have signed fast-growing and highly popular Busboys and Poets to a 6,500 square foot lease at Takoma Central in the Takoma neighborhood of Northwest Washington, DC. The pioneering restaurant/bookstore/market concept will occupy a large portion of the 9,000 square foot retail ground floor of the $36 million, mixed-use development located at the corner of Carroll and Maple Streets. Takoma Central will feature 150 rental apartments adjacent to the Takoma Metrorail station and is just steps from the center of this eclectic, historic urban village. Busboys and Poets is cherished by its customers as a contemporary community center, where people gather to eat, work, browse through books and join in conversation. Takoma is considered to be one of Washington’s most diverse and popular “towns within a city” and Busboys and Poets is a perfect fit for this flourishing neighborhood.

David Franco, Managing Partner at Level 2, commented, “We are thrilled to bring Busboys and Poets to Takoma Central. Busboys’ personality is Takoma Central’s personality is Takoma DC’s personality, setting the stage for a hip Takoma celebrating both its old and new character. Takoma Central, with its commanding Busboys and Poets frontage and outdoor, multi-level terraced dining, will bridge the gap between the Takoma Metro Station and the historic Takoma downtown. Takoma will become the new “it” destination stop on Metro’s red line.”

FCP Managing Partner, Lacy Rice, commented, “Busboys and Poets is a destination retailer, providing a cultural center in each of its four existing locations. Not only will they be welcomed by the neighborhood, but we believe their presence will be a catalyst to further revitalization of this very attractive corner of Washington, DC.”

First established in 2005, Busboys and Poets was created by owner Anas “Andy” Shallal, an artist, activist and restaurateur. After opening the flagship location at 14th and V Streets, neighboring residents embraced the restaurant as a community destination. Busboys and Poets is now located in four distinctive neighborhoods in the Washington Metropolitan area and will open at the Takoma Central location in late 2014, soon after building completion. The development of Takoma Central is reflective of the focus by both the community and the DC Office of Planning to bring increased reinvestment to the neighborhood. In January, restaurateur Jeff Black announced that he would be opening a new restaurant at nearby Laurel Avenue, illustrating the growing confidence in what has been an underserved market.

Takoma Central has been designed to respect and enhance the architectural history and spirit of the Takoma neighborhood, with a five-story Victorian-style warehouse design connected by a glass “hyphen” to a contemporary, four-story brick and stone Art Deco building. The project consists of two phases that are being built concurrently and joined together at the first floor. Busboys and Poets will occupy the long street front along Carroll Street and will continue around the corner to Maple Street. Tall windows and French doors will connect the interior to an outdoor dining terrace along the new, wide sidewalk.