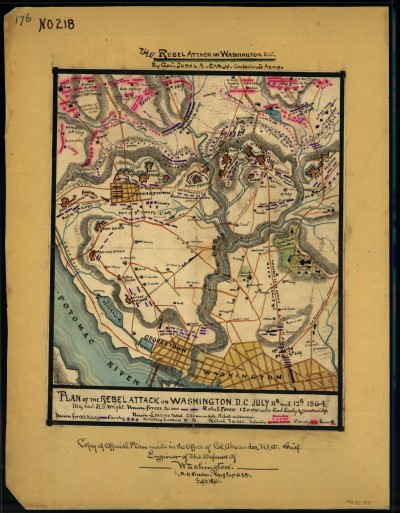 This week’s map is a hand-drawn, color-coded illustration of DC’s defenses late in the Civil War. Take a closer look and you will see various forts in upper NW DC arranged to defend from an attack from the north. In July of 1864, Confederate General Jubal Early approached the city from Maryland and engaged in skirmishes along the DC border before retreating to Leesburg.

Notable features include Tennallytown, Columbia College and the Aqueduct Bridge across the Potomac. Tennallytown, situated at the highest point in DC, was named for John Tennally, owner of a tavern at the corner of present-day Wisconsin Avenue and River Road. It was later shortened to Tenleytown.

The nearby Aqueduct Bridge was built between Georgetown and Rosslyn with the purpose of connecting DC and Alexandria by canal. By 1864 it was repurposed as a footbridge for Union troops. The Key Bridge eventually superseded the Aqueduct Bridge, though ruins still exist near the entrance to the Capital Crescent trail in Georgetown.

Read more →
More Stories
Vigilante Coffee Popping up at Biergarten Haus this WeekTwo Shot in Trinidad, One Stabbed in Brookland