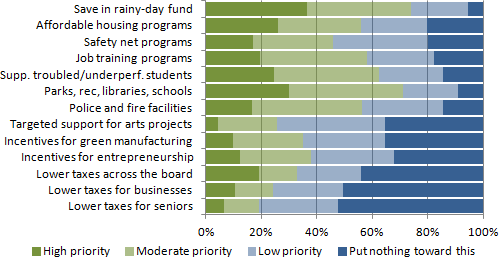 Last week on Let’s Choose DC (a partnership of PoPville, Greater Greater Washington and DCist), we had responses from the candidates on how they would spend DC’s $417 million surplus. But before you rated the candidates on their responses, we asked you for your own views.

We asked you about each possible spending category that any candidate mentioned in his or her responses. (There are lots of other possible budget priorities that the candidates did not mention; for space, we didn’t include any of those.)

74% of you said that putting at least some money into the DC rainy-day fund is a moderator or high priority. Other spending areas that rated highly include parks, recreation, libraries, and schools (71%), supporting troubled or underperforming students (63%) and job training (58%).

On the other end of the spectrum, tax cuts were some of the lowest-ranking categories, with lower taxes for seniors (something Perry Redd mentioned in his response only getting 19% support for being a moderate or high priority, lower business taxes (something a few candidates mentioned) at 24%, and lower taxes overall 33%.

How do the candidates stack up?

In past weeks, we’ve created a single bar graph for how you judged candidates’ responses to our questions. But when it comes to the budget, you’re probably more interested in what a candidate said he or she would do with the money than the way he or she said it.

We wanted to understand how voters who cared about different budget priorities rated each candidate. Did voters who care about affordable housing see the candidates differently from those that would prioritize police and fire facilities? 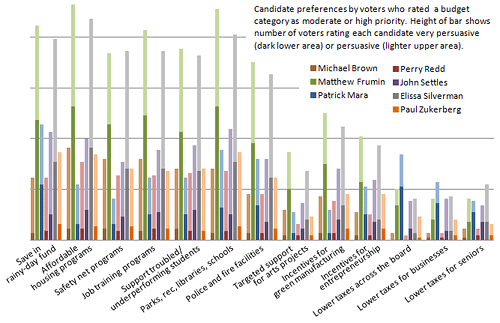 Each of the clusters represents one budget category. If a voter rated that category moderately or very important, his or her votes show up there. Each vertical bar shows how many voters gave a particular candidate a “very persuasive” or “persuasive” rating on that budget category.

Every candidate got a different color—brown for Michael Brown, red for Perry Redd, and gray/silver for Elissa Silverman, with more arbitrary choices for the other 4.

For example, among voters who think saving money in the rainy-day fund is important, Matthew Frumin (green bars) and Elissa Silverman scored the highest for their responses.

In fact, Frumin and Silverman stick out (literally, on the graph) on all of the categories except tax cuts. Frumin barely beat out Silverman in most categories, while she took the top for safety net programs.

Only voters who prioritize tax cuts had a somewhat different view. Perhaps not surprisingly, Patrick Mara won among voters who cared most about general or business tax cuts. However, that was a small proportion of voters.

Despite some early expectations, Mara seems to be struggling to win over voters who might be sympathetic to his fiscal message but also prioritize other factors. He also skipped our question about DC’s growth and this week’s question on bicycling.

Vote on drivers vs. bicycles

This week, candidates weighed in on how drivers, cyclists, and others can just get along on our streets. If you haven’t seen their responses yet, go vote now!