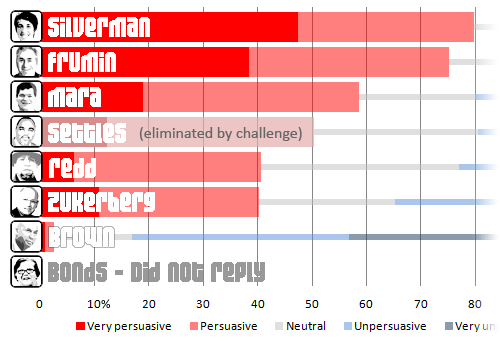 Only 2.5% of voters gave Michael Brown positive marks for his response on ethics this week on Let’s Choose DC (a partnership of PoPville, Greater Greater Washington, and DCist). Elissa Silverman took the top spot in your judgment, with Matthew Frumin second.

We asked the candidates to give their positions on 6 ethics proposals:

Silverman touted her work on Initiative 70 pushing to enshrine the third of these into law. She, Frumin, Patrick Mara, John Settles, and Michael Brown all also endorsed public financing of elections. Paul Zukerberg explicitly opposed it; while we don’t know why voters chose as they did, perhaps most of you disagreed and that contributed to his 6th place finish.

Michael Brown, meanwhile, opposed banning outside employment and changes to constituent service funds. He also did not address the proposals involving monetary or in-kind campaign contributions. As a consequence, 47% of you said he did not answer the question while giving him the lowest finish of any candidate on any question thus far on Let’s Choose DC.

This week, we’re asking about school truancy. See the responses and vote now!