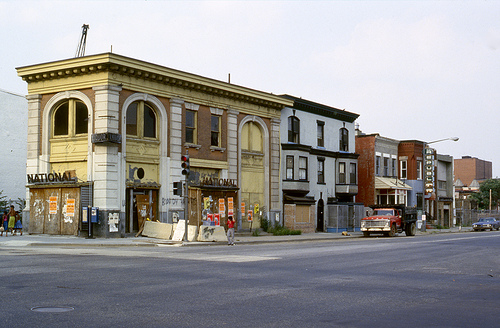 Ed. Note the photographer featured in the article, Michael Horsley, has an incredible archive of DC photos from back in the day.

Thanks to all who sent links for Washington’s Economic Boom, Financed by You:

Washington wasn’t always the place where young professionals plunked down $3,000 a month to announce their arrival. When Abdo founded his business, in 1996, the United States was enjoying around 4 percent economic growth, but in Washington, dysfunction and Mayor Marion Barry Jr. reigned. The city government was locked in a mismanagement-driven fiscal crisis: traffic lights were malfunctioning; garbage trucks stopped picking up trash; District residents were advised to boil their own water; President Clinton and Congress placed the city into federal receivership.

During our drive, Abdo narrated this revival with such intensity that he took a few wrong turns, despite the fact that downtown is just a grid dotted with traffic circles. Near the George Washington University campus, he pointed out a cheap hotel that he plans to turn into a pod hotel. Over by H Street, a neighborhood just a few years ago virtually untouched by gentrification, he pointed out a former convent that he converted into apartments. Abdo announced that he helped develop “thousands” of such tasteful, expensive though not outrageously priced units during the past decade and a half, for “people of substance,” he said, “people who want to participate in this city.”

How Washington managed this transformation, however, is not a story that the rest of the country might want to hear, because we largely financed it.

Read more →
More Stories
Friday Question of the Day – How Safe Do You Feel in DC?Random Reader Rant and/or Revel