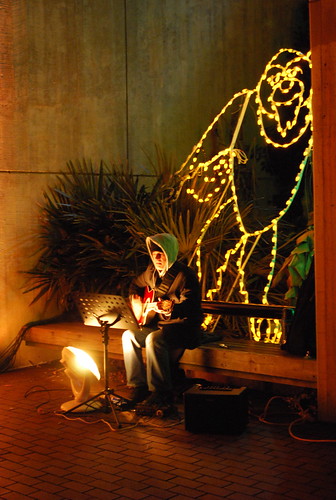 The following was written by PoP contributor Eric Nuzum. You can read Eric’s previous contributions here.

Perhaps I’ve just been too busy with diaper-changing duties for the amazing tiny human being that my wife and I welcomed on Christmas Day, but this news somehow got passed me for awhile. In January, concert megaenormopus Live Nation quietly changed the name of their amphitheater in Bristow, Virginia, the venue formerly known as Nissan Pavilion.

I was driving down the road last week when I heard a radio announcement for an upcoming show there and said out loud to myself, “Did they just say what I think they just said?”

When I got home, looked it up and learned that Nissan Pavilion is now known as (if this is news to you, please brace yourself):

It’s such a jawdroppingly ridiculous idea that it almost zaps all the joy out of making fun of the name. I mean, there are probably no two words in the English language with less rock-n-roll cred than “jiffy” and “lube.”

And if that weren’t enough, they somehow decided to “jazz things up” a bit by adding “Live” at the end, as if simply naming the place “Jiffy Lube” wouldn’t do (though that might confuse people who want to go to an actual Jiffy Lube). Some consultant wearing a $200 tie thought the addition of “Live” at the end of “Jiffy Lube” would somehow make it more exciting. I mean, you wouldn’t want to end up with some unexciting name like, say, Nissan Pavilion or Verizon Center or anything.

But most shocking of all is that Live Nation made this change just a few weeks before the Justice Department ruled on anti-trust concerns over their merger with Ticketmaster. If word of this had spread before Justice gave the okay, I’m sure this would have scuttled the deal. Even the most ardent free market zealot has to admit there are some cases where The Man can have too much unchecked power–like the power to call a rock venue Jiffy Lube Live.  Continues after the jump.

Regardless, I just can’t imagine some road-hardened rock god with long blonde hair and leather chaps walking out on stage and screaming, “Are you ready to rock, Jiffy Lube Live?!?!?!?” Or “Wow! You people at Jiffy Lube Live know how to party!!! Rock on Jiffy Lube Live!!!”

Then, finally, we’ve arrived at a point where we not longer name things after people with great sums of money and simply just name things after great sums of money. Seriously, it seems anyone who wants to call anything whatever they want can simply make sure they are the highest bidder. Naming a concert venue after a chain of automotive service convenience stores? I rest my case.

But, just for argument’s sake, let’s say I had a large amount of money, a very large amount of money, and nothing productive to do with it. When Live Nation was accepting bids to rename Nissan Pavilion, let’s say I entered a bid to call it Eric’s Big Fuckpile of Rock-N-Roll Magic Awesome–and that everytime someone mentioned this title, he or she had to make a laser sound effect with their mouth afterwards (an addition suggested by a consultant). Now let’s say I outbid the Jiffy Lube folks by just ten dollars.

And don’t forget the laser sound effect–I would have paid millions to make you do that.