Thanks to a reader for the heads up:

“It appears a new pho place will be opening at 608 H St NW, according to DC Register. It looks like they’ll be applying for a liquor license and will be open til 3 am!”

“NATURE OF OPERATION
Asian and Vietnamese cuisine. 65 seats and total capacity load of 65 on first floor and
storage on the second floor. 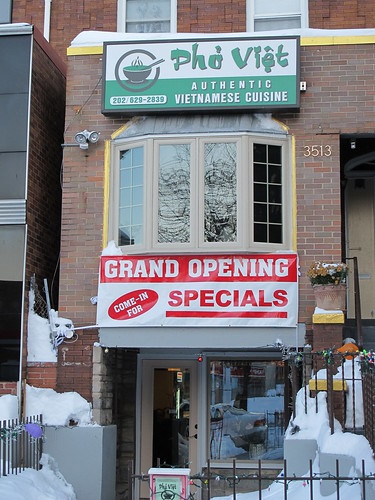 And speaking of Pho a reader has some veggie Pho news from Pho Viet (3513 14th Street, NW):

“I’m a regular at Pho Viet. Nina and Mike are really great people and have put a lot of work into their restaurant and I’m dying for them to succeed. They spent a year renovating that basement and they’re some of the hardest working people I’ve ever met.

Anyway, I wanted to let you know that they added veggie pho to their menu and they have a chicken pho too (with beef broth). When you originally posted about them, there were a few commenters who wanted veggie pho.”