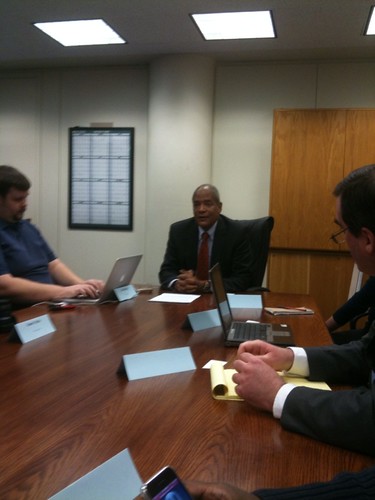 Well, I along with about 10 other bloggers had the pleasure of sitting down for a lengthy discussion with Mr. Catoe to talk about Metro’s problems and future. There was no mention of an imminent retirement, not even a hint… I consider the sit down pretty moot at this point. Oh well. Here’s the announcement from Metro:

“Metro General Manager John Catoe has decided to retire and leave the Washington Metropolitan Area Transit Authority after three years as its top manager. Catoe informed Metro’s Board of Directors today of his decision to leave the transit agency. His last day will be Friday, April 2.

“I have decided that it is time for me to channel my future in new directions and provide this organization an opportunity to move beyond the current distractions,” Catoe said. “Good leaders know how to impact change. Great leaders know when it’s time for leadership change. I hope I fall into the latter category.”

“The Board of Directors has just been informed of General Manager Catoe’s decision to retire,” said Board Chairman Jim Graham. “We appreciate his stewardship during this difficult time and we will miss his leadership. While we regret his decision, he continues to have the full confidence of the Board of Directors.

“We will shortly begin the deliberative process on transition and succession,” Graham said.”