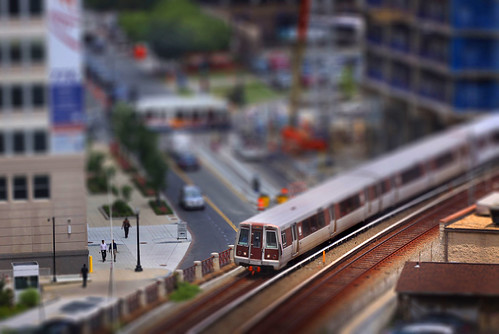 I want to relate a rather disturbing incident that occurred yesterday evening on the platform at the Union Station Metro. I was waiting for a train when I noticed four teenagers horsing around on the platform. They were pushing and shoving one another, laughing, yelling… generally acting like teenagers. There was a man leaning up against the railing under the escalators also waiting for the train while listening to his iPod. The teens moved closer to him until they were right next to him, two on either side. One of the teens pulled the man’s headphones out of his ears. At first, he thought they were just joking with him and he smiled. Then, another of the teens started pulling on his headphone cord to get his iPod out of his pocket. He pulled back and tried to move away, but the teens surrounded him and continued to try and pull his iPod out of his pocket.

I had been watching this unfold in front of me, and at this point I moved towards the teens and yelled, “hey,” at them. With their attention now on me, the man was able to pull his iPod back and get away from the teens. The four then started to move towards me and one of them said, “hey what?” At this point, another came up behind me and knocked my hat off of my head while another picked it up and ran a few feet away. I said, “what the fuck?” and stood my ground, staring at them.

At this point, the train pulled into the station, and we all got on—me, the iPod man (who mumbled, “thanks,” to me as he passed), and the four kids. I stood in the middle of the car while the teens took seats at the far end. They passed my hat around and laughed, making comments about it and me. I think they expected me to try to get it back, but, instead, I just pulled another hat out of my bag, put it on, and stood smiling at them. I never broke their gaze and they stared back at me. Eventually, they all stood up and walked down the aisle to stand across from me. They continued to stare at me and make comments about the hat, as if daring me to make a move for it. I figured this is what they wanted, so I didn’t say anything.

Finally, when they realized that I wasn’t going to play their game, one of them walked up to me and handed me my hat back. Then they got off at the next station. Now, I was willing to chalk up most of their behavior to just teens being teens. Until they tried to steal the man’s iPod. Here’s the disturbing part, though: not a single person spoke up while all of this was going on. The platform at Union Station was fairly full and I know I wasn’t the only one who saw what they were doing.

And, when we all got on the train, there were plenty of people around to see what was happening. No one said anything to me or to the kids. In fact, I could see some people actively ignoring what was going on. I’m no hero, but I think if I hadn’t said something to those kids, they would have stolen that man’s iPod right there in front of everyone. And, I wonder if I had tried to get my hat back and things had escalated between me and the teens, if anyone would have stepped in to help. All in all, I was pretty disgusted by the whole encounter, both with the behavior of the teenagers and my fellow Metro riders.

What would you have done? Should I expect people to intervene if I’m being robbed and/or harassed in plain sight? Or, is it every man for himself in this city?”

This is a terrible situation that sadly we’ve discussed and heard about far too frequently. I think you have to do with what you are comfortable with doing. Like many things we discuss, one’s action will vary from person to person. I think the best thing to do when possible is to alert an authority, whether a WMATA employee or a member of law enforcement if possible. I wouldn’t hesitate to use the intercoms in each train car. Sadly, one can’t rely on other people to intervene. Some people will for sure, but I’d say they are in the minority. If people don’t intervene directly I’d like to at least think they’d also do what they can to alert the authorities. One also has to be careful in these situations because it is not known whether or not someone has a weapon. What do you guys think are the responsibilities of fellow metro riders in situations like these?