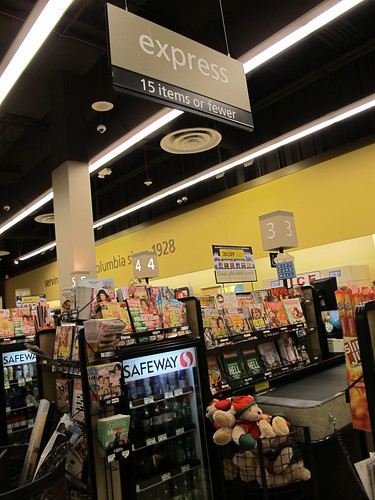 Last night, I went grocery shopping at the new and extremely busy Safeway at the City Vista condo building. Having only 8 items, I went to a checkout line labeled “Express 15 Items or Less”. As the couple in front of me started putting their items on the conveyor belt, I noticed they had a lot more than 15 items. I estimated 25 items. So my question is: At this point, since they have already waited and are the next in line and already loading stuff up to be checked out, do you mention that this is the Express lane? I just went to another line, but was rather disgusted.”

Ah, this is one of the small but very frustrating aspects of life. I think we’ve all probably encountered this at one point. I know I never say anything, because I think it’s just not worth it. I wish the cashier would see the violation before the offender puts all his/her items on the conveyor belt. But that’s not very realistic. I think this is a situation where some folks are just inconsiderate and it is easiest to just wait. But I can understand that if you don’t say anything the offender is likely to continue his/her behavior in the future. On the flip side, I was at the Giant on Park Road the other day and I only had some milk and a very nice customer let me go ahead of her. So it may all even out at the end of the day…

Has anyone ever mentioned to a shopper that they have more than 15 (or whatever the number is) items in an express lane?