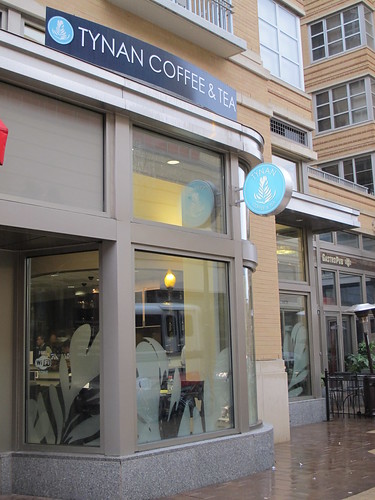 There have been a lot of comments over the last few weeks about Tynan Coffee & Tea at 1400 Irving Street, NW. There have been positive and negative comments. But I figured I’d make a new post after receiving a letter from a reader sent to the owners. It is very negative and I’m wondering what the overall sentiment is. I know that the owners will read this post so if you have suggestions def. make them. What’s your overall feel of the place so far? Following is a lengthy letter written from a reader to the owners of Tynan:

“I have visited your store for a total of 4 times, hoping the next trip will be better than the previous, but sad to say I was deeply disappointed.

I am a very active member of the Columbia Heights community since 2002. I love the neighborhood and am very excited about all business that opens up. I specially enjoy coffee shops and was very happy for Tynan Coffee & Tea opening. I send tons of emails to my friends and family (lots of them) about your business and was at the store the 2nd day it opened with my partner. Our initial reaction was that it was a beautiful space, a bit bright, a kind of space we would like to come frequently. We were not able to get seating that day so we got our lattés (skim with No foam) and left the store.

2nd trip was with my sister and her boyfriend. There were some seating by the fireplace. My sister loves fireplaces so they sat there as I proceed to order for everyone. 1 Coffee drink, 1 pumpkin spice latté, and 1 chi latté. The barrister women proceed to make the specialty drinks. I noticed that she was scooping powder out of the cups as she was trying to (I guess) get the right amount. I thought that was weird since drinks should have a pre determined measuring to get the right flavor/taste. I then saw her use the same spoon to mix both drinks without rinsing it in between. She then proceeds to cover both drinks with tops, but she realized she did not know which drink was which so I heard her say to herself “I don’t know which one is which…” followed by.. “I don’t care.” I was amazed by what I heard so I said to her, Excuse me? She did not even bother to look up to explain herself or anything, she just asked the male barrister guy to come and help her. She explained to him that she could not tell which drink was which. He opened the top from one of the cups, brought a small cup, poured some into the small cup, proceed to taste it, and decided which one was which drink, put the top back on (without refilling the cup with more milk) and handed it to me. During the whole time, neither of them seems concerned with what just happened, didn’t care less, and didn’t say I am sorry or anything like that. At this point, I am not happy, but did not want to spoil the experience to my sister and her boyfriend so I kept my cool. I went to get napkin and by then I have no clue which drink is which. I used the small strew to test both drinks, both tasted the same to me. I went back to the barrister guy and requested they do both drinks again, he did it correctly, and that was the end of that.

3rd visit, my partner and I went for latté. I ordered latté and it was a disaster. The latté smelled and tested so bad I only had one sip and that was it. The latté took on an Oder of some “skin condition cream” I never know what it is, but I know I do not like the smell whenever someone who had it on is near me. I really did not want to go back to the barrister lady to ask her to remake my drink since this would have been our 2nd interaction about a bad/incorrect drink. I really did not need the latté that much so my partner and I just decided to leave. Continues after the jump.

4th visit. My sister who I brought on my second trip knew what had happened on my 2nd trip, but was not directly affected by it since she was not near the counter when the ugliness happened. I did not want to give up with the place so I wanted to give it more chance so we walked in. We ordered our drinks (casher was pleasant enough). We got hot tea and latté with no foam. Moments later, there was a drink on the bar. There was no announcement as to what it was so I looked into it and it looked like latté (since it seems to have some foam). Second drink came and the barrister announced it was latté, so at this point I thought I had two lattés on my hand so I asked is the Tea coming? The barrister said to the cashier why didn’t you ask for tea, then the casher said the first one is tea, at this point I opened the top from the first cup to make sure it was tea, then she explained that even Tea’s have foams the way Tynan coffee & Tea makes it, I said oh ok thanks and gave the tea to my sister. I then took my latté, but noticed it had foam even though I asked for no foam. I then proceed to say excuse me to the barrister lady who had her face turned away at this point. After a second call to her, she mumbled something like: here we go again and turned. I told her this had foam I asked for no foam. She took my drinks and starting a new one immediately… She did not say I am sorry or execuse me, noting. I wanted to make sure she understood that I am displeased with the service so far 4 visits), she asked why? I told her about the “I don’t care” incident, at this point she interrupted and said to me that she thought we resolved it already, also she said she said she did not care and she said to herself, not to me. I try to tell her she shouldn’t do things like that in front of customers, etc…. at this point a supervisor steps in and asked what was the problem. I told him that I was displeased by the service I have received so far and I am really upset because I really was hoping for things to be different. I explained to him what had happened in the past, and what happened today. The whole time she was talking over me so at this point he told her to step back into the backroom, which she did for a little while. He said he was going to refund our money, I told him that is not the point and we are ok paying for the drinks. My sister was really upset by the whole thing and wanted to leave the store immediately. We both did not like the way the lady was treating us. She had a smirk the whole time and clearly, she had “I don’t care” attitude. I requested to talk to the owner/ manager; I was told none were around. I thought about leaving the store and never come back, but I thought it would be doing a disservice to the owners, especially if they are unaware of what is happening. We stayed in the store and try to recover some of the quality time we were hoping to have by going to coffee shop. On the way home we passed by Starbucks and we said to ourselves we could have been served nicely here and perhaps we should have come here instead.

Why am I writing all this and why do I care this much? Well, as I indicted before, I really like to support new business that are coming in my hood. I especially like coffee shops and was happy with the addition, and I really didn’t have any reason to come back to this store after the 2nd visit, but like I stated before I really wanted to give Tynan workers the benefit of the doubt, but 4 visit later I am more frustrated and upset by my experience there and unfortunately for your business Tynan Coffee is not associated with relaxing space, but stressful place with employees who couldn’t care less. I have the power to bring a lot more customers and those customers to do the same to your store, but sadly, I could not find any reason to do so anymore despite giving you 4 chances.

My sister and I both thought that the owners really need to be involved in the first few weeks of opening their business to follow/see how their employees interact with their customers, how they resolve problems, etc. In an even conflict happen they should be able to jump in to smooth out those conflicts, and teach their employees in the process how to do so. The same barrister lady when I told her that she hasn’t made my drinks properly in the last 3 visits, her answer to that was not I am sorry OR I will do better next time, she said to me “next time have somebody else make it for you.” Really, is this how your employee talks to your customers?

Also, it might be a good idea to read blogs and see what people are saying about your store. For instance, everybody I brought to the store (4 of us so far) agree that the lighting is brutal. You could have a much warmer, coffee/tea place experience with less light (no overhead lights please). One person in a blog said that your store look like an apple store. Some said butcher shop, etc. (not a good thing for a coffee shop).

Last night my partner and I visited Mid City Café for the first time and we were pleasantly surprised by the service and quality of product. The place was small and wasn’t as modern looking as yours, however, the lighting was much better than yours and the customer service was perfect and what one should expect from coffee/tea shop. Another favorite place is Columbia Heights Coffee. They are friendly, make you great coffee, but once again they do not have enough space. Your place has the potential to get a lot more clients that are loyal if your workers were pleasant and care for what they are doing.
Will I ever visit your store again, at this point NO. However, a receptive owner/manager who is willing to listen and correct what is lacking, cares enough to communicate with me, apologize for the bad services, will get me back there. Remember, it is not just me; I tend to be the person friends and family trust when making decision on where to go.
Once again, I am doing this only because I think you, the owner/manager, probably have no idea what is going on and do not want to penalize you for your employees mistakes.

The store supervisour already told me he would pass on my message to the owners/managers, but I thought I send this directly so that you have a fuller picture. Hope to hear from you the owner/manager very soon.”