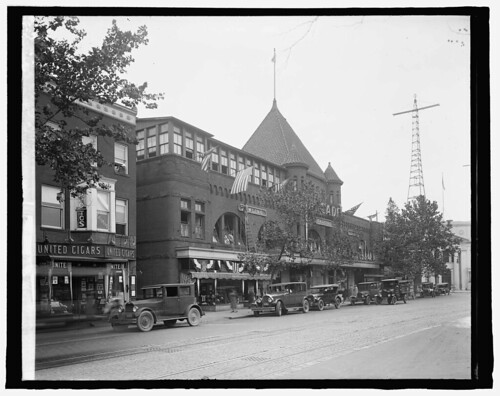 Above’s photo is from the Library of Congress, and shows the Arcade Market, which used to stand on the site that is now DCUSA. Press release from an email:

“A neighborhood that began as an elite suburb on the high ground above Washington has since hosted every group of people that ever influenced Washington’s cultural life. This story and many more are told on Cultural Tourism DC’s Cultural Convergence: Columbia Heights Heritage Trail. On this self-guided walking tour, 19 poster-sized street signs combine storytelling, photography, and maps to lead residents and visitors through old and new Columbia Heights, introducing the people who changed the world with technology, ideas, literature, laws, and leadership.

Before the trail unveiling, Councilmembers Cheh and Graham will present a Council of the District of Columbia Resolution naming the Neighborhood Heritage Trails the District’s Official Walking Trails. The Resolution recognizes the Heritage Trails, created in partnership with the District Department of Transpiration, for “combining the elements of health and history. The Heritage Trails will enhance the quality of life for DC citizens,” providing “trail walkers with approximately two hours of gentle, outdoor exercise at the walker’s own pace and schedule.”

Councilmember Mary Cheh who introduced the Resolution states, “The Heritage Trails connect our neighborhoods and provide healthy recreation opportunities for residents and visitors.”

After the presentation and trail sign unveiling, activities will take place on Civic Plaza from 2 – 4 pm. Scheduled activities include:

“As Cultural Tourism DC marks its tenth anniversary in 2009 we are thrilled to celebrate the completion of our tenth Neighborhood Heritage Trail,” says Linda Harper, Cultural Tourism DC executive director. “This is a vibrant, exciting neighborhood, and we happy to have worked with its residents to tell some amazing stories.”

Along the way, walkers will discover a neighborhood that has welcomed every group to make its mark on the city. Trail highlights include:

Cultural Tourism DC began collaborating in 2007 with the Columbia Heights Heritage Trail Working Group to create the trail. Community residents led the effort to collect neighborhood stories and photographs, shaping the trail every step of the way.

Free guides will be available on Civic Plaza on October 24 as well as from merchants and institutions along the route. Instructions for downloading a free guidebook, or ordering one for $5 shipping and handling per guide, are available at www.CulturalTourismDC.org. A complete list of distribution points is found online as well.