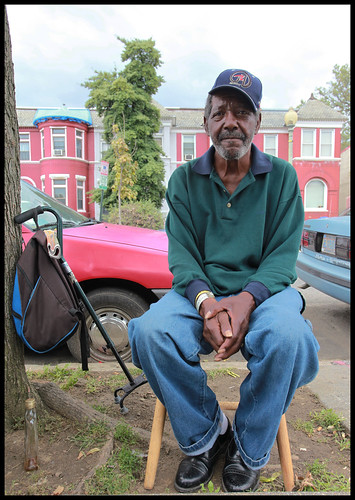 Ed. Note: This story has been cross posted at People’s District but I found this perspective to be very powerful and certainly worth sharing and discussing.

“I’m 76-years-old. I was born in this neighborhood and lived here all of my life. I’ve seen a lot of changes on H Street, some for the better and some for the worse. But, I have lived with them. I just go with the flow because I know I can’t do nothing about it.

“In my days, I’ve seen a lot of good changes, but a lot of wrong changes too, especially now. I’ve seen people forced out of their homes so others can move in. Since they rebuilt H Street, we basically lost our rights and now we have to fight for them. And why? We grew up here. Basically, everybody here is struggling, except the owners of those establishments on H Street.

“These clubs, restaurants, and places for carry out, they don’t help the neighborhood at all. They should have opened restaurants where anyone can enter, a place that fits the old and the new. But, it’s not like that, we can’t afford these places. You know what I’m saying?

“And, the police are coming around all of the time now that these places are here and harassing us. We ain’t doing nothing but hanging out, been doing that for 30-40 years with no problems. We around every day, some of us work and some of us don’t, but we don’t bother nobody.

“At night time, the streets are flooded with nothing but white people. I guess we get our time during the day and they get their time at night, except that we get harassed during the day by the police, too. At night, I go in the house and let them enjoy the street. If I am out here at night as a black man, I am like an endangered species. It don’t bother me, but that is the change that I see.”

Read more about the development of H Street NE here.