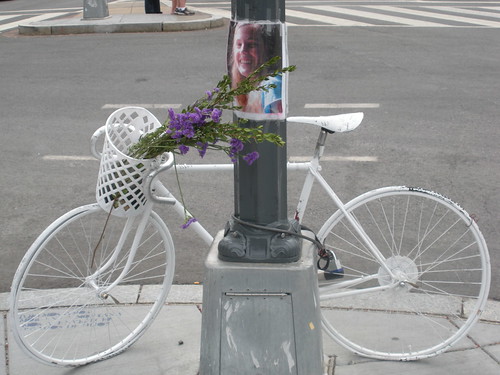 On Aug. 31st we spoke about the removal of the Ghost Bike memorial to Alice Swanson at 20th and R.

I received the following email this morning:

“Early this morning, 22 white bicycles (ghost bikes) were placed around the intersection of Connecticut Avenue, R Street, and 20th Street NW, at the location where cyclist Alice Swanson was killed. The bikes are replacing the original ghost bike which was removed by the city under the direction of the Mayor’s office. The city has also removed the secondary memorial placed by Ms. Swanson’s aunt. The original ghost bike was placed in front of La Tomate restaurant by the Washington Area Bicycle Association as a memorial to Ms. Swanson and a warning of the dangers that confront cyclists.

The bikes will be decorated with flowers throughout the day. A blog with a statement about the revenge of the ghost bikes can be found at: aliceswansonridesagain.wordpress.com“