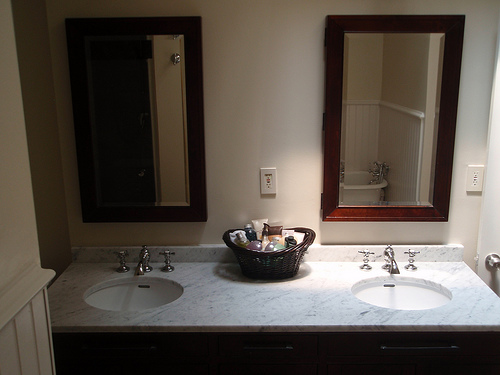 Here’s a feature we haven’t seen in a while – kitchen/bathroom renovations. If you have a renovation of any room in your house/condo please send some photos and details to princeofpetworth (at) gmail (dot) com. If the slideshow is blocked for you at the bottom you can see the flickr set here.

I bought the house expecting to tear out the bathroom. Everything about it was a nightmare. Other than being terribly ugly, it wasn’t functional and had a lot of dead space. Most of the towel racks were loose or fell off of the wall soon after I moved in. The toilet paper holder was u-shaped with the open side to the user, so every time you went for a square or two, the roll would come flying out at you. The stairs to the jacuzzi served no purpose other than as a toe-stubber. The “tile” was mock marble and if you took the time to look, you’d see the pixels on it. The shower was the size of a middle school locker and I would always end up with elbow bruises from washing my hair. The shower door and frame eventually loosened from the stall and became very dangerous because they would fall out… heavy, sharp glass and metal. The outlet above the sink didn’t work (I had to charge the electric toothbrush in the bedroom). No lock on the door. Wallpapered tile on the side of the shower. Not to mention the huge uselss jacuzzi-tub-for-three. 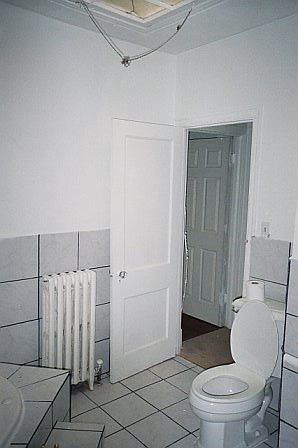 The renovation took two and a half months. This was difficult because it was the only bathroom I have (other than a stray toilet in the basement, thank goodness). But once the contractor tore the old room out, there were a lot of unexpected issues underneath: bad workmanship and general old-house quirks. That added a lot to the time. The total cost in the end was 11K.

I’m very proud and happy with the new bathroom. Every single fixture, electrical and plumbing, was moved. It’s got hooks and electrical outlets in all the right places. I even set it up so that when the shower door swings open, it’s cushioned by the toilet paper roll instead of hitting the wall. The medicine cabinets are huge and beautiful with three mirrors each (!). The shower is big, so big you can comfortably dry off in it, but not so big that it feels like wasted space. And the vanity has tons of storage. I’ve been having a hard time decorating it because I’m afraid to ruin it!”