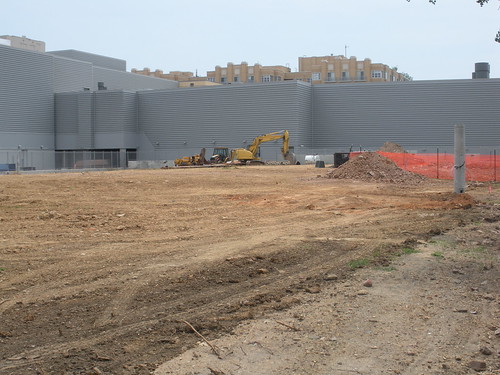 What is the status of soccer field behind DC USA? It has been cleared but nothing more has been done. I think you said it was now part of the HS’s property but they were short on funds. Any idea of completion timeline? And when complete will it be open to the community? And along those lines, is the community allowed/encouraged to use the HS fields for sports when school is not in session?”

There was a similar Dear PoP about this back in April. At that time a few commenters said:

“I saw a contractor taking measurements along the edge of the aforementioned vacant lot. He said that it would soon be an artificial-turf football field. I assume that the field would belong to the Multicultural school, since the DCUSA/school were actually developed by associated parties, and the empty lot is smack in the middle.”

“It is (hopefully) going to be a soccer field or some variation of an athletic field for the school. My aunt is on the board at Bell and she is one of the people working on raising the money needed to get things going. From what I understand they are very close to having all the $. I will drop her an e-mail and see if I can get a status update for everyone.”

I walked by this weekend and the tractor was new to me. It looked like some sort of digging had begun. Can any of the commenters update what the plans and/or timelines are for this project?

more stories
Previous
Taking the Cat For a Walk
Next
Dear PoP – What’s Going on at Columbia Road?