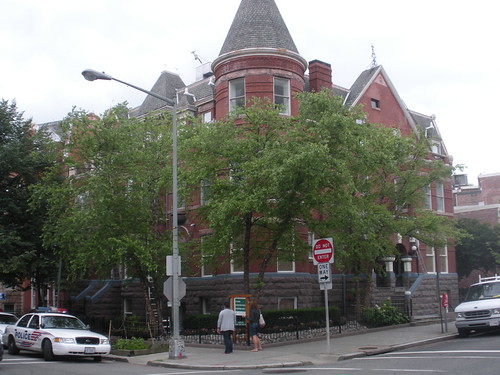 As I’ve recently become a fan of the LA Lakers, Detroit Red Wings and the Bloomingdale Neighborhood – I feel quite comfortable jumping on this bandwagon. Ed. Note: I despise the Lakers and Red Wings but really do love Bloomingdale. Anyway along with the rest of the DC blogosphere, I, too, took a visit to 20th and S Streets to check out the supposed house for MTV’s Real World DC. All signs point to this most likely being the house. There was a cop car stationed out front and some odd parking restrictions out front: 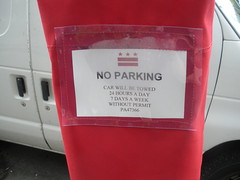 There was even a “guard” at the front door. I happened to notice that the door was open so I took a photo. And the “guard” jumped up and immediately closed the front door. Now here is the PoP exclusive: 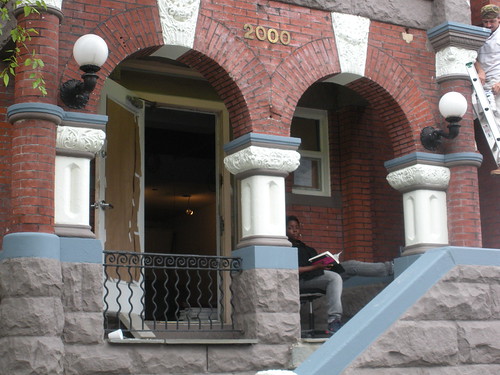 You can see there are lights and wires – so this is def. the Real World house!

But I’m seriously confused as to why the filming of this show generates so much hostility. Granted I haven’t seen the show in 13 years but when I watched it, I always thought it was quite entertaining. I’m sure it’s bringing some good tax dollars to DC as well. I have no doubt that some of the cast may be fools. But the fools are the fun ones to watch. Many people feel they’re gonna destroy the neighborhood. So they’ll be going to some bars for a few months. I hardly think that will destroy a neighborhood.

Why does their arrival generate so much hostility? I mean really – we don’t have representation in Congress, crime is out of control, we recently experienced a tax scandal where DC lost $50 million dollars due to stupidity, our public schools are still in poor shape, etc. but some folks are going nuts about this? If only this was all we had to worry about…