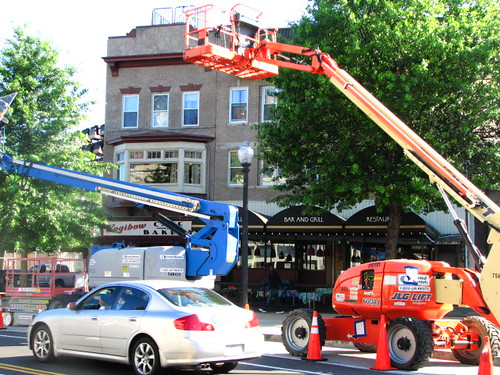 You might want to wander over to Adams Morgan tonight where the out-of-towners will likely be movie stars and not legislative correspondents. Or you might want to avoid the whole neighborhood entirely since the sheer volume of street space taken up by massive trucks, dollies and other movie-making equipment almost guarantees traffic hassles. I’ve stumbled across the no-name-yet Nicholson/Witherspoon/Rudd vehicle in a couple of locations across town – even watched Jack and Paul emote for a few takes across the street from the Scientologists, at Connecticut and R, the other day — but the sheer size of this effort suggests that tonight is going to be a big night. And face it, everyone needs to get through Adams Morgan every now and again, if only to remind themselves why they rarely go there any more, and a Wednesday night with a movie shoot for curbside entertainment beats heck out of a Friday night with rookies puking on the curb. 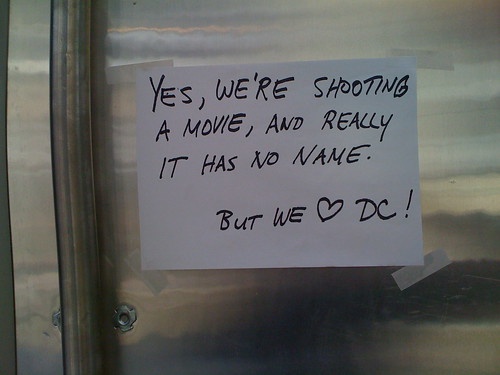 Ed. Note: I still enjoy going to Adams Morgan from time to time! Here is a list of favorite bars we discussed a couple weeks ago. So, I’ve been getting emails pretty regularly asking why certain areas of AM are closed (including the Duke Ellington Bridge). This is the film I’ve been talking about when I email you back. And in what I’ll call great timing, PoPville flickr user Tyrannous got some great shots of the filming last night.

“reese witherspoon, paul rudd, james L. Brooks on the corner of 18th and columbia ave in front of the starbucks filming a yet to be titled movie.”