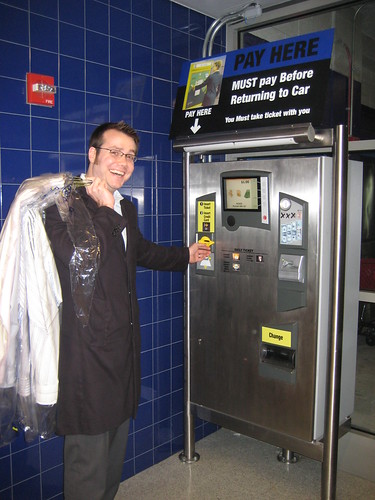 Everyone has a breaking point. Everything is normal, then something so absolutely annoying happens that you lose your shit. For Bjork, it was being photographed after a long flight to Taiwan. For Johnny Depp, it’s slow hotel room service. Postal workers, that dude in the movie Network–we all have that point. Hell, Lou Dobbs has made a career out of being outraged every weeknight at exactly 7pm.

Though it has yet to happen, I know the precise thing that will someday drive me into a batshit crazy rage: watching people fumble through using the “Pay Here” machine in the DCUSA parking garage.

I think my intolerance comes from my own abilities to execute this simple task. In all humility, I’m like a kendo master of the “Pay Here” machine. Even with a bag in each hand, I can insert the ticket, insert my dollar, grab my ticket, and step aside–all in less than 18 seconds. If both hands are free and I have a dollar coin, I can get it done in less than 12.

Spend three minutes hanging around the P1 elevator lobby at DCUSA and I think you’ll agree that I am the exception.

Now, for those who plan to give me grief for driving from Petworth to DCUSA, let me remind you that we live in a city where driving a car (an occasionally necessary evil, admit it) is an exercise in misery. Journeying to the “come on in, there is plenty of space”-ness of DCUSA’s garage is cathartic. It’s worth a melted iceberg or two just to have the experience.

Admittedly, part of me understands why the “Pay Here” machine might blow a few minds, as the DCUSA garage sends out screwy signals from the minute you drive in. How can someone spend tens of millions of dollars on a garage, yet fail to consider that entering and exiting on the left might confuse people? DCUSA usually pays a security person to stand there all day, just to keep folks from entering through the exit ramp. At least that guy doesn’t need to worry about the waxing and waning of the economy.

When it comes time to settle up and head out, most people look at the “Pay Here” machine like it is quantum physics equation, like it’s an elaborate puzzle or riddle or something. Overwhelmed looks of confusion abound. However, in a world of complexity, the “Pay Here” machine is really one of the simplest, most straight ahead exchanges one could have all day.  Continues after the jump.

On my latest trip to DCUSA, I stood behind a dude who was re-inserting the same quarter in the machine over and over again, at least six times. Then he looked at me, completely befuddled.

“It doesn’t take quarters,” I said.

“You see the photo of a quarter with a thick black ‘X’ over it?” I asked.

Then the guy stares at his handful of change.

“But I don’t have a dollar bill,” he said, somehow insinuating that this was now my problem.

Perhaps that’s were the outrage comes in, because it actually was my problem. The lined of huddled flummoxed masses at the other machine was even longer. If I wanted to get out of this parking deck in the next day or two, I needed to help him. I handed him my dollar and took four quarters in exchange. Of course, I had a second dollar out and ready to go (with my ticket posed in my other hand and ready to insert) before this guy had even figured out which direction his bill needed to face.

I think the “Pay Here” machine should function like the ancient contraptions in the Indiana Jones movies. Push the wrong button or do functions in the wrong order or outside of an acceptable time limit and a large impaling spike will explode from the floor, poison darts fly out of the wall, or a giant stone ball will roll out of a trap door in the ceiling, crushing those who find “Please insert ticket in machine” too complex an instruction.

It is worth mentioning that other things have competed for this position as top potential rage inducer in my life.

The previous candidate was the Rita’s Italian Ice in Columbia Heights. Before visiting Rita’s you must always remember one thing: For some reason, Rita’s occupies a tear in the space/time continuum where everything happens in slow motion. Life operates at a different pace for those at Rita’s. Things operate so slowly at Rita’s that most folks are under the mistaken impression that they are closed for the season. Wrong. It has just taken them four months to work up the energy to reopen the doors again. That’s actually fine. I understand this and accept it as part of going there.

What chaps my ass isn’t the slow service, it’s the customers. How can someone wait 15 minutes in line and not even think to consider what flavor they’d like until they are standing in front of the register? Even the Rita’s employees, who take 3 minutes to count back 47 cents in change, get frustrated waiting on these people to decide between Alex’s Lemonade and Very Berry (both just sound soooooo delicious!!!!).

Okay, so maybe I should just stay away from Columbia Heights in general–it would be good for my blood pressure.

So, dear readers, what are your hair-trigger local rage inducers? Seeing only three registers open at Giant on a Saturday afternoon? Metrobuses that can’t seem to board passengers unless they straddle three lanes of traffic? I can’t believe I’m the only otherwise-tolerant and pleasant person who has something in our hood get under their skin.

Go ahead, let it rip, you’ll feel better. Trust me.

Read more →
More Stories
So the Rich Did This?Tina Visits the Washington Monument