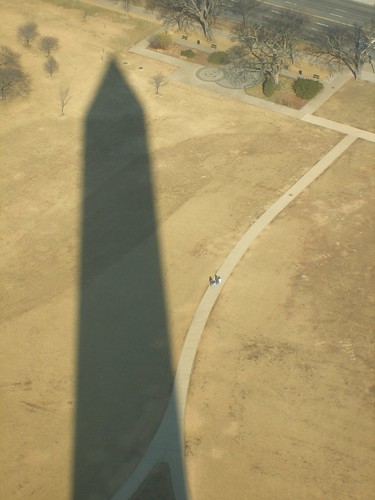 Like Nichole mentioned in her post about Jimmy T’s, sometimes I too feel like I take the city for granted. I remember when I first moved here I was excited to visit all the monuments and museums and do all of the touristy things that you stop making time for once you’ve been in town for a while. I loved spending time downtown, marveling at Lincoln and Jefferson, admiring the waterfalls in the FDR memorial, or trying to convince a friend to go paddle-boating with me in the Tidal Basin. After a while these activities lost their luster, and most of the time I don’t really think about the fact that the city we live in is sort of a big deal. Then the Cherry Blossom Festival happens, or Fourth of July rolls around, or, you know, the President gets inaugurated. 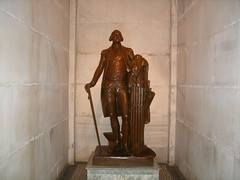 On January 20th, I joined the masses on the mall and spent a few hours freezing my butt off in the shadow of the Washington Monument and I remembered that in my four years in DC, I have never made it inside. So this week, in honor of its namesake’s impending birthday, I decided to take the “official” tour.

After an uncharacteristically boring ride down 14th Street on the 52 bus, I stopped into the Washington Monument Lodge, (in the monuments eastern shadow) at 15th and Jefferson to pick up my free ticket. I made it just in time for the 10am tour and ran up to the front entrance to get in line. If you have the opportunity, it’s probably the most pleasant to go on a week day, when you won’t have to battle long lines and crowds. During busy season, people start lining up as early as 7am and tickets frequently run out early in the day, but you can always reserve them ahead of time for $1.50 each. Continues after the jump. 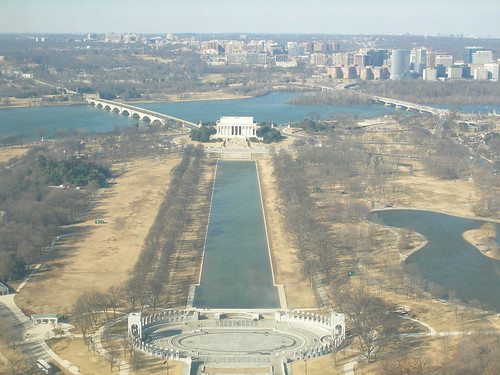 Once we got inside we were led around the base of the monument, and into an elevator where a National Park Service guide informed us that we were going to travel 500 feet up the world’s tallest free-standing stone structure in about 70 seconds. That was about the extent of the “tour” as once up at the top you’re pretty much on your own to wander around and take in the view out of the windows facing in each direction. The day that I went was a little overcast, and the windows are pretty dirty, but you do have an unobstructed view of the city and on a clear day it reaches about 30 miles in every direction. It made me wish for a higher quality camera, or at least better picture taking skills. 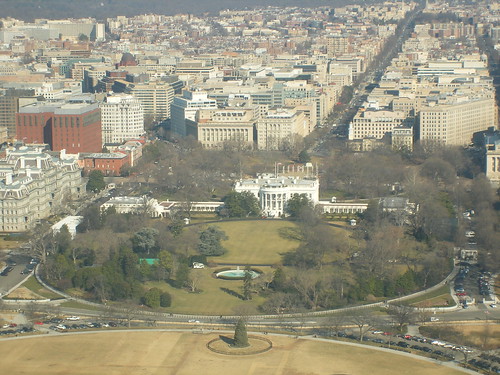 After I’d had my fill on the upper level I walked down to the 490 foot level via the only currently open stairwell in the monument to the “museum” portion. There are some placards with information about the monuments history and about George Washington himself. I learned many interesting facts, including, that during its construction there was quite a bit of opposition from people “who considered the obelisk design distasteful.” Congress wasn’t having any of that, though, and the monument was erected as planned. (tee hee!)

Though tours of the monument are basically self-guided, there are a few NPS employees around who I tried to get some information from. None of them were really very talkative, but I did find out from one that there are 898 stairs inside, the stairwell was last opened in 1976 and is now closed indefinitely, there is no access (not even for officials) past 500 feet and the only way to get to the tippy top of the monument is by way of scaffolding on the outside. I asked if he expected a large crowds over the long weekend, and he told me that though he only started working this past summer he understood that the busiest times are the 4th of July and during the Cherry Blossom Festival. Not surprising.

My favorite part of the tour was the elevator ride back to the bottom. Twice during the ride down the elevator slows and the clouded glass windows clear to reveal the interior stairwell and give the riders a glimpse of the commemorative state stones. I tried really hard to take pictures of this, but much to my dismay not one of them came out even a little bit visible. I think if there was no elevator, tours of the monument would be a lot less popular, but it would be very cool if you could at least walk back down the stairs and check out the commemorative stones up close. I have heard rumors that you can sweet talk your way into the stairwell, but the guards I encountered didn’t really seem like they could be sweet talked into anything. Either way, I’m glad I finally took the time to visit the monument, and I think it’s something every DC resident (and visitor) should do at least once.