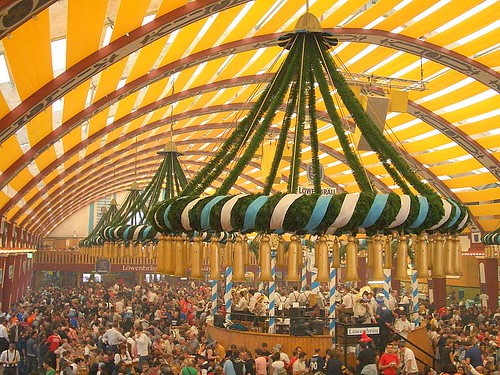 Yesterday’s crime discussion got me kind of blue so I wanted to lighten up the FQoTD a bit. I was trying to remember my favorite vacation. It came down to Oktoberfest in Munich or Running with the Bulls in Pamplona. Both were definitely amazing but running with the bulls was pretty freaking scary. Even though the festival itself was amazing, the actually running with the bulls is terrifying. And anyone who tells you differently is either insane or lying. I’m slightly insane and had fortified myself with many vodka and a tang like orange flavored drinks but still when then cannon went off and the bulls caught up to you it was pretty rough. Don’t get me wrong, I’m glad I did it and the adreline rush was fun but it can’t match Oktoberfest.

Oktoberfest on the other hand was pure joy every waking minute. At Oktoberfest I went with a great group of people who I nearly instantly got separated from. So I spent tons of time hanging out with random Spanish, Italians, Germans and folks from all over the world. For some reason I remember there was a lot of singing John Denver songs and inexplicably, to me, everyone knew the words as well as many, many toasts. Half the time we couldn’t even speak the same language but it was no less fun.

So for a fun FQoTD – what has been your favorite trip (abroad or in the states)?