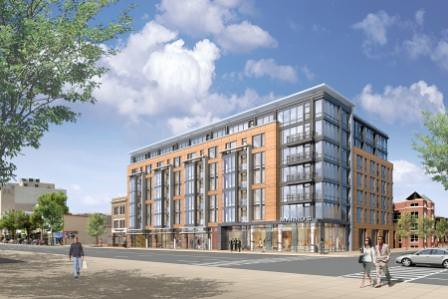 The DC Historic Preservation Review Board (HPRB) approved revised plans as presented by the JBG Companies for their mixed-use project at 1800-1818 14th Street, NW (14th and S Streets, NW) on the site of the old Whitman-Walker clinic.

JBG presented revised plans at the February 2009 CSNA meeting, which incorporated comments received from CSNA, HPRB, ANC 2B, Dupont Circle Conservancy, and surrounding neighbors. After the presentation, CSNA voted to support the revised plan as presented. CSNA then shared their approval and support of the project with HPRB.

JBG is the same group developing the hotel at 13th and U Streets, NW that we discussed earlier in the week.

More info and renderings can be found here. How do you think this proposed building looks?