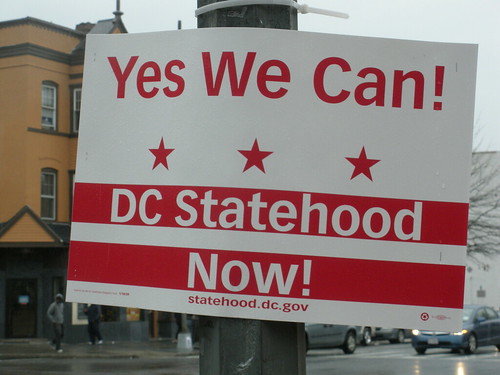 I was all for the “Yes We Can!” but I think “We Did It”. So for any other new causes lets be a little creative and come up with a new slogan. Or if we have to recycle slogans let’s use the best – from the great Adlai Stevenson – “The Thinking Man’s Candidate”. So we can say, “DC Statehood – The Thinking Man’s Objective”. Or perhaps we can update it to say “The Thinking Person’s Objective”. Adlai was the master orator although I guess he never did win the presidential elections… Anyone else tired of everyone using Obama slogans for other causes and marketing purposes (like Pepsi)?

Anyway, these signs are all over DC now. DCist has a little background info. They say:

“Over the weekend, D.C. voting rights activists hung signs advocating for statehood. Designed to look like the District’s flag and emblazoned with Obama’s “Yes We Can!” slogan, the signs were the brainchild of Shadow Senator Michael Brown and paid for by the D.C. Statehood Fund.”

Read more →
More Stories
I’ve Just About Burned Out On Obama Posters. That Is Until I Saw This OneDear PoP – Mugging at 3rd and R St., NW