There’s a little ditty in the play Avenue Q called “Schadenfreude.” It’s one of those, funny-because-it’s-true songs, about taking pleasure in the misfortune of others. Well, last week I was having one of those days where nothing seems to go right and I was just in an all around crummy mood and feeling sorry for myself. So when I discovered that SpeakeasyDC was hosting an open mic event called “Rock Bottom: Stories about falling flat, bombing out, and bouncing back” somewhere in my head a little Gary Coleman-esque voice began to sing, “and when I see how sad you are, it sort of makes me…Happy!”

SpeakeasyDC has been hosting Open Mic nights on the 2nd Tuesday of every month, since 1997. They have jumped around a bit, hosting at the Black Cat and HR57, before settling in a Station9 (1438 U street) just about 2 years ago. Every month 8-10 storytellers take the mic to tell an original tale based on their life experiences, always to the tune of a different theme. 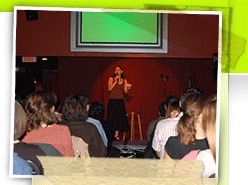 Open mic night with SpeakeasyDC isn’t your traditional open mic night in the sense that story tellers sign up ahead of time and are required to participate in a coaching session before hitting the stage. However, for those that prefer a more off-the-cuff approach, there is an opportunity to sign up for a three minute “live-wire” slots, time-permitting, to tell a story at the end of the night. This time around we heard about 13 stories (including a couple live wires) ranging from, blowing it on a Public Access TV dating show, to watching a divorce turn one’s life into a soap opera, to a confrontation with a goose that led to an unhealthy addiction with daytime television (my personal favorite!) Story continues after the jump.

Among the story tellers this month were some newbies, a couple of seasoned veterans, and Amy Saidman, Executive Director of SpeakeasyDC who shared her own tale of being fired from a bagel shop. I had a chance to chat with Amy for a few minutes before the show started and she gave me a bit of background on the organization and the show. Born out of the Washington Storytellers Theater, the Speakeasy sessions began in 1997. Amy took over artisitic direction in 2001. In 2006 the speakeasy sort of “swallowed” the Washington Storytellers Theater and they shifted the focus to supporting local people in telling their stories. Their mission is to entertain, create meaning, and build community through the creation and performance of original stories drawn from real-life experience.

They have clearly been doing a pretty good job, as this month’s storytellers spoke to a packed house, and Amy told me that they sold out 12 shows at this year’s Fringe Festival. Right now she is the only full time employee, but SpeakeasyDC employs a number of volunteers, and relies on community support to continue offering classes, storytelling sessions and plenty of other events. Check out the calendar to see what’s coming down the pike. Next months open mic is titled, “Lions, Tigers and Bears, Oh My: Stories about Fear” on October 14. SpeakeasyDC has also added some special events to their calendar. Amy recommends Vijai Nathans upcoming show, McGoddess: Big Macs, Karma and the American Dream. This event will be held on October 10 at 1200 U Street. Vijai is one of the leading Indian American female comedians, she was featured in the Montreal International Comedy Festival and Smithsonian’s Freer Gallery. She recently sold out a 300 seat show at UMD, so this event is expected to be a real hit!

When all was said and done and the last storyteller walked off the stage, the evening wasn’t all reveling in the misfortune of others as every story had a happy ending. Whether it was the schadenfreude effect, or the notion that when you’ve hit rock bottom you’ve got nowhere to go but up, I did walk home with a little lift in my step and a smile on my face.