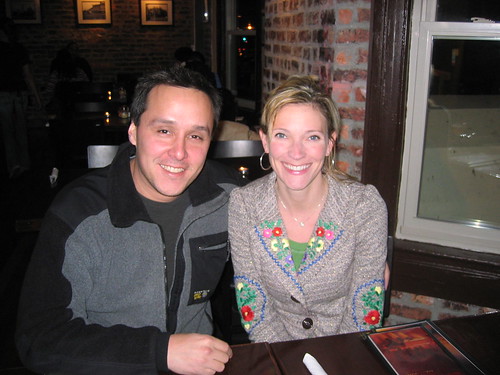 John Andrade, 39 is co-owner with his brother Jim of Asylum on 18th Street in Adams Morgan. However, John is being profiled here because he is also the new owner of Meridian Pint. You know, the restaurant that will go into the old Bi-Rite building on the corner of 11th and Park. I sat down with John and his girlfriend Sarah at Red Rocks last week. Let me say from the start the folks I have met who are opening/have opened new bars and restaurants in the neighborhood are the absolute coolest. The owners of Red Rocks, Maroni & Bros., Looking Glass Lounge and Red Derby are among the nicest people I have ever met and what they all have in common is their love of the neighborhoods in which they operate. And John Andrade is absolutely no exception.

John and Sarah are the type of people you would love to meet at a party or have dinner with. They are completely chill, tell good stories and have phenomenal senses of humor. I was fortunate to chat with them for a couple of hours. Profile continues after the jump.

John came to DC 15 years ago, fresh out of college, when he got a call from his brother Jim who originally opened Asylum back in 1991. Andrade notes that his brother Jim was one of the most active members in the 80s of the DC nightlife scene. While Jim remains a co-owner of Asylum he now lives on the Island of Roatan off the coast of Hondorus. When John first got the call to be a partner he thought he’d work a year or two at Asylum and then head off to be a ski bum out west. Luckily for the DC night scene that was not case.

John and his brother bought a house in Petworth seven years ago. They selected Petworth because, although they liked the homes in Mt. Pleasant they were a bit too expensive. John liked the fact that Petworth was relatively quiet and that there was not a lot of commerce. About Petworth, he also adds “I’m happy to say I have some of the best neighbors I’ve ever had in my life.” While initially content with the lack of commerce, John is now happy that there has been a progression of businesses up north in Petworth. At this point I about dropped my beer from sheer joy when he added “Maybe one day I’ll open up a place in Petworth.”

John explained that every since he has lived in Petworth he has used a route that takes him past the Bi-Rite building but he never thought about opening up a restaurant there until one day after having some coffee at Columbia Heights Coffee he saw a for lease sign on the vacant building and on a whim jotted down the number. After calling the number he was originally told that the space was already taken but then received a call 2 weeks later telling him that the deal fell through and it was his if he wanted it. John recounts the experience: “I was a bit in shock and unprepared for the task ahead. I wasn’t actually on the hunt to open up another place and didn’t have a specific project in mind.”

Andrade has signed a 10 year lease for space in the building. Anyone who has seen the building knows that there is a bit of construction that needs to take place. Andrade explained that John Goldman, the head of 3DG which owns the building, will commence early construction in about 6-8 weeks. During this period they will excavate the basement and put in the second floor. Andrade estimates that once construction begins it will take about 6 months before the building is in a condition for “me to do my work.” While Andrade hopes his restaurant will be ready to open by late fall of ’08 he recognizes that the permitting process can be quite lengthy and the opening may not occur until late ’08 early ’09.

While Meridian Pint is the tentative name of the new endeavor there is a possibility that the name may change before the opening. John is excited about this venture because, while he has enjoyed his experience with Asylum, he “has a desire to my own thing, something that will be my baby.” As such, John will be working full time at the new venture and Asylum will be run by newly named general manager, Eric Judycki.

Andrade got the idea for offering exclusively draft beers from his friend, Brian Harrison, owner of the Reef in Adams Morgan. Harrision came up with the idea because he felt draft beers would have minimal impact on the environment compared to bottles and cans. At the moment there are plans to offer at least 20 beers on draft. If beer is not your thing, they will also offer a variety of wines and a fully stocked liquor bar. When the restaurant/bar gets closer to opening, Andrade will host an open house where he will have a beer and wine tasting to help select the final options. Very, very cool.

The main floor will be a predominately dining area “with a huge bar” approximately 30-35 feet. Andrade has also leased out 800 square feet of the basement. Andrade told me that it is possible that the Rorschach Theatre may lease additional space in the basement. Should that deal become final it is possible Andrade may collaborate with the Theatre on the basement space. But at the moment the tentative plans are for the basement to be more of a lounging area with a bar and the possibility of a DJ in the style of St. Ex.

Being a Good Neighbor

Andrade has an open door policy and “if anyone has any concerns I’d hope they’d tell them to me so I can address them.” Andrade can be reached by email at [email protected] As an avid cyclist and runner, Andrade plans on starting a cycling and running club out of this establishment with a long term goal of bringing a bike race to the neighborhood.

John is hoping that his place will be one where you can hang out very late at night and listen to good music and not be shut down at 1am. He respects the fact that he is in a neighborhood, which is what attracted him to the space in the first place, so he plans on having the space soundproofed and as mentioned above will address and resolve any issues or concerns that arise. He is hoping that the restaurant will be open until 2am Sun.-Thurs. and 3am Fri-Sat.