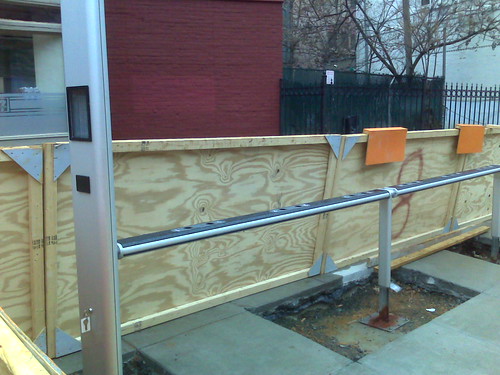 Will bike rentals work in DC? Thanks to a reader for sending the above photo of a bike rental station being built on Rhode Island Ave at 14th Street. I remember reading that bike rentals have been a huge success in Paris, so will it work here in DC? I’m super psyched, it sounds like an awesome idea to me. After the jump read the full email from the reader with some details on the program and a link to a Web site explaining more.

The reader writes:  “My friend sent met the attached photo, asking if I’d heard anything
about bike rental stations going up in the district (how he knew that
that’s what a partially constructed bike-rental stand looks like is
beyond me). I, being the nosey nelly that I am, did some google work,
and them emailed Jim Sebastian, the city government’s manager of
Bicycle, Pedestrian, and Transportation Demand Management Programs.

To be launched downtown in the next few weeks, Jim says, and expanding
to other areas such as Petworth later, SmartBike is a bike sharing
program developed by Clear Channel Adshel, an international outdoor
advertising company, and coming to DC as part of the city’s bus
shelter advertising contract.

The system will work similar to Zip Car – you register online or on
the phone, get a membership card and use that card to release the bike
at one of the 10 kiosks around town. Rates are expected to be $1 to $2
per hour, the DC gov site says. You can return the bike to any of the
sites, unless it’s full, and then you’ll have to move on to the next
one.

The bikes will have “4 speed internal hub gears, coaster and hand
breaks, fenders, chain guard, lights, and a front rack,” according to
the DC gov site (I know nothing about bikes, really, so take that for
what it is.) No helmets provided.

Much of that info comes from this site: www.ddot.dc.gov/bike

My friend says there’s another one just outside the Reeves Gov’t Bldg
on U at 14th St, NW.”