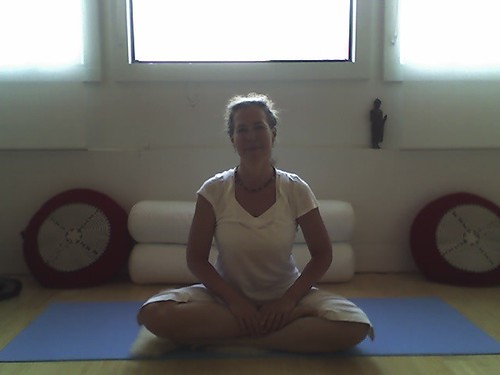 Allow me to introduce Elizabeth Greathouse, who actually lives in Brookland but her business Yoga House Studio is located right on Georgia Ave. and Princeton above Temperance Hall. So that counts.

First, let me set the scene. I had arrived to the interview a bit early so I conveniently was able to grab a drink at Temperance Hall downstairs from the Yoga House. So it was quite a contrast, initially, when I walked up the stairs to meet Elizabeth. I was immediately hit with the smell of incense burning and I almost expected to see my college buddies sitting on the floor listening to some Grateful Dead, as I stumbled upon a huge number of shoes on the third floor landing. I dutifully took off my shoes and knocked on the door. There was dead silence. So I opened the door and peaked my head around. I saw about a dozen folks sitting on the floor in what I assume was a yoga position, um, breathing. Yikes, I instantly felt awkward. So I’m sitting on a bench just chilling when all of a sudden the entire group starts chanting. At this point, I’m saying to myself, maybe I should have had more than one drink. But as the chanting continued I have to tell you it was really quite peaceful and I started feeling super relaxed. Of course that may have also been the killer rum and coke Scott fixed me downstairs, starting to kick in. No doubt about it though I felt like I was in a very warm, peaceful, safe place which is actually quite a contrast from the bustling gritty Georgia Avenue scene right outside.

“Well, there are no longer people urinating in the doorways at 6:00 am in the morning, so that is a positive development.” – Elizabeth Greathouse

Elizabeth immediately came over to me and welcomed me to yoga house. She is a beautiful woman who was positively glowing as we sat down to speak. Damn, that chanting really must work, I thought to myself. I asked Elizabeth how on earth (or heaven) she decided to pick Petworth for her Yoga studio. In the Spring of 2005, Elizabeth noticed on the Petworth listserv that Lakritz/Adler (the developers and owners of the building) were looking to rent out the two floors above Temperance Hall. Elizabeth notes that her Yoga Studio actually opened up before Temperance Hall. She also noted that she has a very good relationship with Temperance Hall now that the bass on the juke box has been lowered and since the smoking ban went into effect.

Prior to opening Yoga House, Elizabeth was a lawyer for 20 years before moving to DC in 2000. Not long after arriving she began teaching Yoga in Adams Morgan and Tenleytown. Yoga House opened its doors in September 2006 and Elizabeth initially had retained many of her students although she lost a few from the Tenleytown location. Elizabeth admits that she did not know too much about Petworth before moving her business here but was delighted that it was near her home in Brookland. Since coming here, in addition to Temperance, Elizabeth has become a fan of Domku. She would love to see a coffee shop open up on Georgia Ave. When pressed to discuss what type of change she had witnessed, for starters, she cited the fact that “you don’t see too many junkies on the street at 6:30 in the morning anymore.” Well, that certainly is a positive development!

“We have bamboo floors!” – Elizabeth Greathouse

The studio itself is beautiful. It is located on two floors. Both spaces exude calmness and serenity. The walls are exposed brick and on the second floor there is a string of colorful prayer flags. (I think they are the Tibetan kind but I forgot to ask.) On the third floor there is a little office area, a kitchen area and a big empty space for the students to spread out their mats. Also unique to the third floor and probably to Petworth in general is the gigantic gong at the front of the room which is used in a particular type of Yoga that Elizabeth teaches.

There is no doubt about that. Every question I asked was answered with Elizabeth at the edge of her seat looking at me intensely, directly into my eyes. I felt like she was looking for my soul, fortunately I had brought it with me that evening.

“If the price of rent isn’t crazy I’ll stay here. I’m expecting the neighborhood to grow and improve.”

Elizabeth was very honest and open about her thoughts on the space and the neighborhood in general. “The neighborhood hasn’t improved as fast as I’d like but there is lots of development coming to this block, there are big condos going up above the metro so hopefully I won’t get priced out!”, she told me. When Elizabeth refers to the neighborhood she is talking about the immediate vicinity around her business on Georgia Avenue. She would especially like to see all the vacant buildings renovated and improved. She notes that “with pride of ownership comes beautification.” Elizabeth currently has a five year lease which increases 5% a year and then has an option to renew for another five years.

“I get wonderful feedback.”

This past weekend was her busiest weekend with over thirty students attending all three classes. Elizabeth teaches what is known as Kundalini Yoga which deals with breathing and mantras. She studied with Yogi Bhajan the founder of this style of yoga for eight years. Yoga makes Elizabeth “feel so much better emotionally and a lot more stable.” Her classes are usually 2/3 women. I also noticed that there was lots of diversity in her class. The class seemed evenly split between black and white students.

Elizabeth teaches 4 private classes and 10 full classes. She has 7 other teachers, a few of whom are from the neighborhood. The classes cost $20 per session individually or $13 per session if you purchase a package. Currently she is able to pay all her bills but, she notes, fortunately, her husband, Mark, has “a good job and can pay the mortgage on his salary. He has trusted me to make the right decisions and he doesn’t even do Yoga!”, she explained.

“Some people are afraid of personal awareness because then they must take personal responsibility.”

Elizabeth explained to me that Yoga is not religious rather it is spiritual. It is “spiritual in the sense of looking at spirit and emotions and having a concept of being able to affect life by thoughts and emotions.” She concluded that “it has an awareness component not a religious one.” I should add in addition to the spiritual component that yoga also gives a hell of a workout too.

I was very skeptical when I heard all the chanting but in the end my mind was changed. Each and every student had huge smiles on their faces as they exited the studio and they visibly looked super at ease. Elizabeth has a class for beginners on Saturday that I’m definitely going to check out… or maybe I’ll still go to Temperance Hall for my own brand of relaxation. But I can conclude that we are very lucky to have this amazing place in our neighborhood. If you are remotely interested in Yoga I would urge you to check it out. I think I gained five years on my life and I only witnessed five minutes of one class!

more stories
Previous
Well, I’m Not Looking For Work
Next
You got to be kidding me