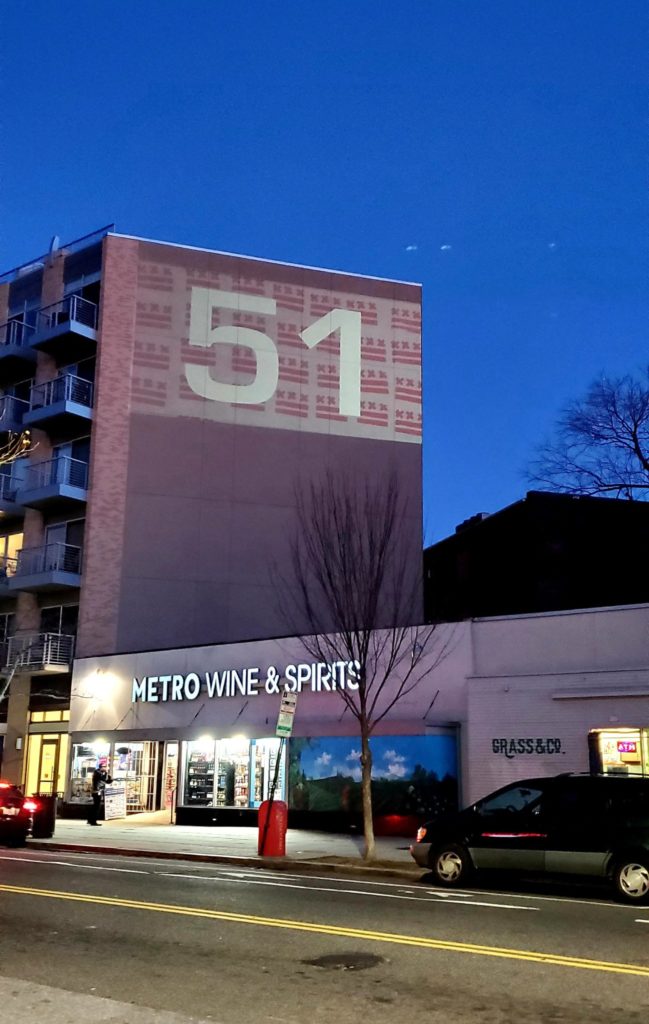 Thanks to Mandi for sharing the: “Update on the Adams Morgan countdown clock.”

And in other projections, check out the Cathedral tonight: END_OF_DOCUMENT_TOKEN_TO_BE_REPLACED 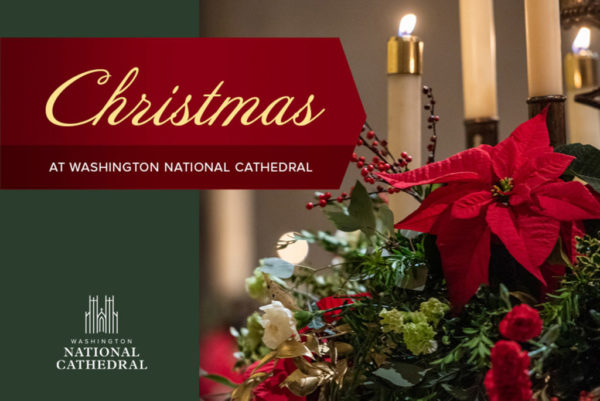 There’s no question Christmas is going to look different for many of us this year, but there’s no reason you can’t celebrate at home with Washington National Cathedral’s online Christmas services and concerts.

All you have to do is sign up for a Christmas Season Pass online. You can register for free or add a donation. Then you’re done! The National Cathedral will email you the day of each service or concert with access instructions.

Some of the programming this year includes:

You’ll find a full schedule of events online, and be sure to register online before the first event airs on Wednesday, December 16. 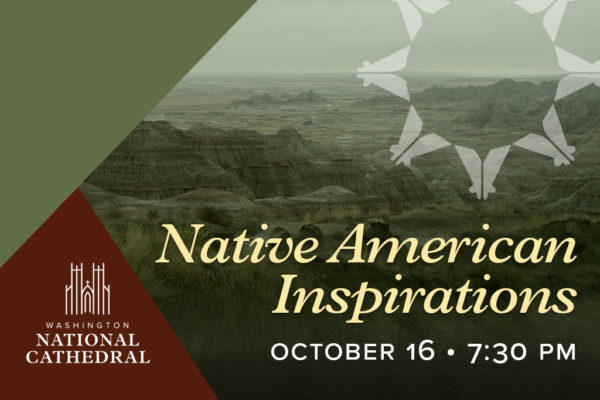 The music of Native American people inspired a unique style of classical music known as the “Indianist” movement, and on October 16 the National Cathedral will host a concert with PostClassical Ensemble showcasing their groundbreaking adaptations.

U.S. Representative Deb Haaland (D-N.M.), the first Native American woman to preside over the U.S. House of Representatives, is scheduled to make introductory remarks, followed by music and dancing. Included in the program are performances from the Lakota Music Project and the South Dakota Symphony Orchestra, singing and drumming by Emmanuel Black Bear, and powerful invocations by tribal elder Chris Eagle Hawk.

Organized and performed by the PostClassical Ensemble and conducted by Ángel Gil-Ordonez, performances will include Shakamaxon for string orchestra and Resolution from Standing Bear, both by Jerod Tate, a Chickasaw composer and pianist whose work draws on American Indian history and culture. Curt Cacioppo’s Five North American Indigenous Songs for a cappella chorus will also see its D.C. debut.

The “Native American Inspirations” program takes place Wednesday, October 16 at 7:30 p.m. at the Washington National Cathedral. Tickets range from $10 for students to $25-$65. 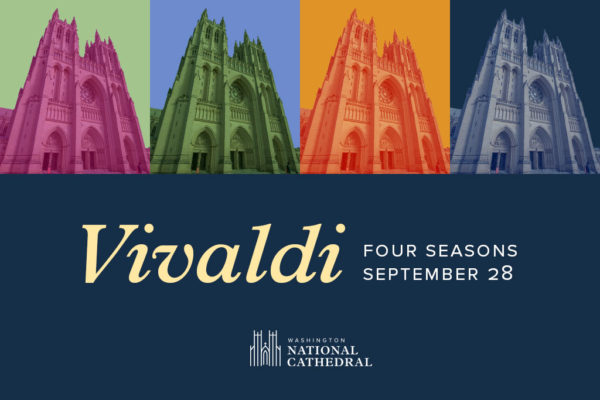 Even if you didn’t know it, you’ve heard Vivaldi’s “The Four Seasons” in movies, commercials and even on The Simpsons.

Come experience one of the most recognizable works of classical music at the National Cathedral.

But just because “The Four Seasons” is familiar doesn’t mean it won’t dazzle you. With these four violin concertos, you can feel the beauty of a year in full. Close your eyes and visualize a summer storm, a cooling autumn breeze, the feel of a flake of snow landing on your nose and the murmuring streams of spring.

The September 28 performance introduces the Cathedral’s newest artist-in-residence, Elicia Silverstein, and also features Vivaldi’s “Gloria” and Berio’s “Corale”. As summer leads to fall, allow Vivaldi’s accessible concertos to transport you through a year in one evening.

It’s the perfect way to experience the crisp magic of autumn, and you’ll finally be able to identify that catchy classical tune that sets the tone for so many powerful pop culture moment. 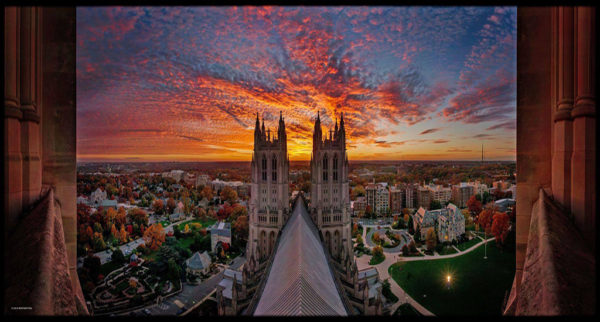 The Neo-Gothic splendor of the massive and celebrated Washington National Cathedral is the ideal setting for the commencement of Holy Week.

A simple visit for a tour or mass lifts the spirit and prepares the soul for the thoughtful celebration to come. And on Sunday, April 14 at 4 p.m., the experience becomes even more unforgettable and meaningful: A Palm Sunday performance of Mozart’s “Requiem.”

Mozart’s last and most poignant, heart-wrenching work is the capstone to a Palm Sunday matinee concert. The performance begins with seasonally appropriate, brooding arias and cantatas by J.S. Bach and others.

END_OF_DOCUMENT_TOKEN_TO_BE_REPLACED 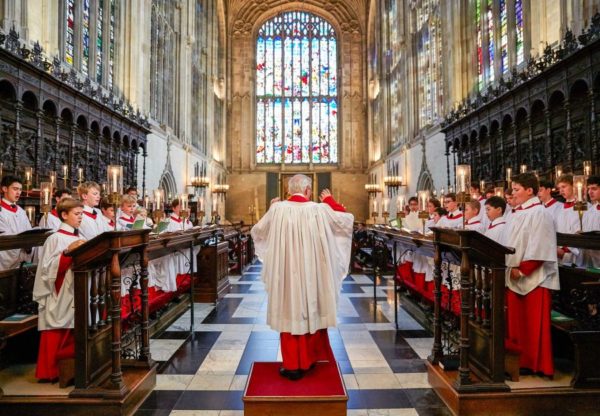 One of the most celebrated choir groups in the world is making a rare U.S. visit, and Washington National Cathedral is host to one of only three stops on the tour.

The Choir of King’s College, Cambridge, can trace its history back to the 15th century, when the College was founded at the University of Cambridge. And on Saturday, March 30, the renowned boys choir will sing the British choral music it has mastered over several centuries.

The boys will perform 14 songs, highlighted by two organ solos belted out on the 10,647 pipes of the Cathedral’s Great Organ. The compositions include works by Monteverdi, Palestrina, Purcell, Britten and Vaughn Williams. This is the last chance for local audiences to experience the choir under the direction of Stephen Cleobury, who is retiring.

Admission ranges from $25 to $95; students will be admitted for $15. More information and information on purchasing tickets is available here: https://tix.cathedral.org/TheatreManager/1/online?performance=18191

END_OF_DOCUMENT_TOKEN_TO_BE_REPLACED 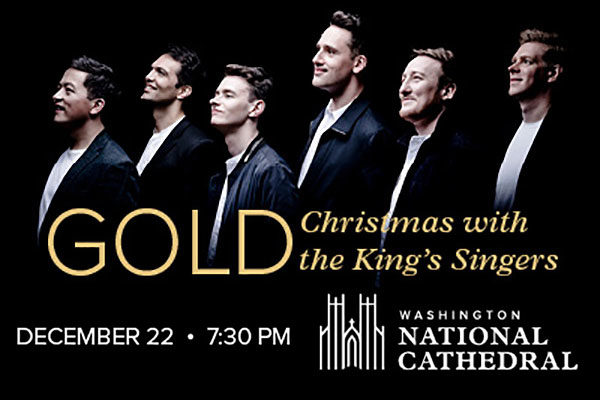 The King’s Singers bring their 2018 Grammy-nominated album GOLD to the hallowed halls of the Washington National Cathedral for a special holiday performance Saturday, December 22 at 7:30 p.m. Ticket information is here.

The British group’s album was nominated for “Best Classical Compendium,” its second Grammy nomination, earlier this month. They will perform other holiday-themed selections from their repertoire.

The six-voice ensemble, celebrating its 50th anniversary this year, are consummate entertainers bring a new twist to holiday classics with their delightfully British sense of humor.

Joy to the world! 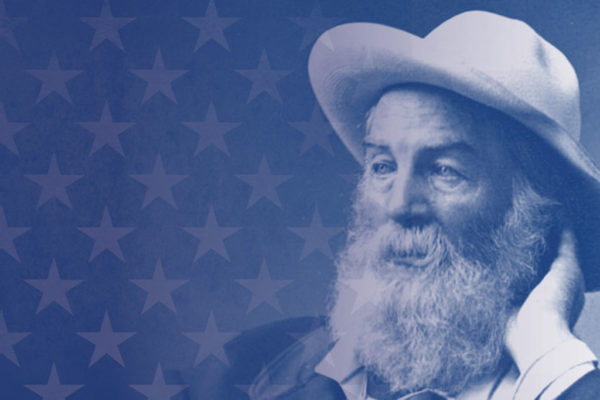 What would Walt Whitman have thought about the 2018 midterm election campaigns?

The question is not as rhetorical as it sounds: Who knows what profound insight on our divisive political process will be revealed Monday, November 5, in a special performance of songs set to the great poet’s work and followed by a moderated discussion at the majestic Washington National Cathedral.

As a musical bonus, the evening will see the world premiere of American composer Curt Cacioppos’ “I, madly struggling, cry,” a setting of stanzas by Whitman and commissioned by the PostClassical Ensemble, the experimental orchestral laboratory that is sponsoring the event.

The music starts at 7:30 p.m. and will be followed by a discussion hosted by PBS NewsHour correspondent Jeffrey Brown. Panelists include:

Admission is $65; reservations can be made here. The Washington National Cathedral is at 3101 Wisconsin Avenue, NW; you can not miss it.

Still wondering what Whitman would have thought about the elections? Here’s a clue: “America is not for special types, for the caste, but for the great mass of people — vast, surging, hopeful.” 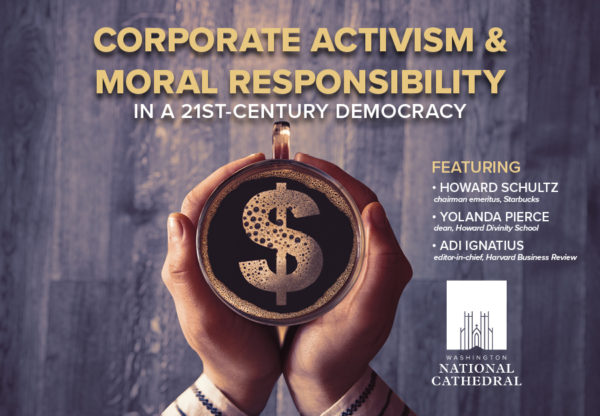 If corporations are “people,” as the Supreme Court determined in the landmark Citizens United political financing ruling, do they also have moral responsibilities? And how is the public to react to companies that take activist actions in ongoing culture wars, such as LGBTQ laws, health care policies and climate change?

Those questions will be considered during a rare opportunity at the Washington National Cathedral when Howard Schultz, former CEO of Starbucks, and Rev. Yolanda Pierce, dean of the Howard Divinity School, take the stage for a public discussion called “Corporate Activism & Moral Responsibility in a 21st Century Democracy.”

The conversation will take place Tuesday, October 16, at 7 p.m. Tickets ($15) can be purchased here. 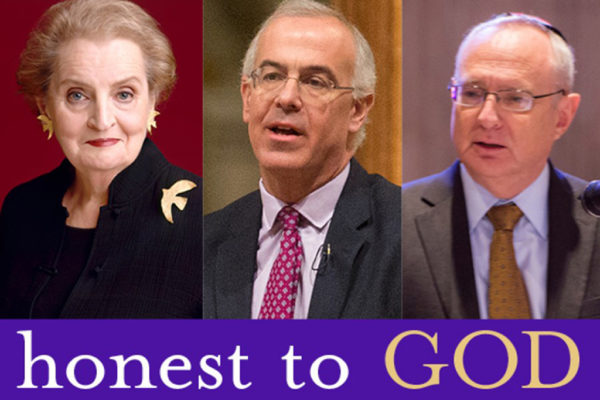 The impact of one’s faith on one’s life is sometimes obvious, but more often mysterious. And few are comfortable to discuss in public how their faith informs their careers and private lives.

Which is why a special event at the Washington National Cathedral at 7 p.m. on Wednesday, October 3, promises to be informative, insightful and quite possibly awe-inspiring.

Three accomplished civic figures — Madeleine Albright, David Saperstein and David Brooks — will reveal the ways in which their lives have been shaped by the practices of their faith in a frank and revealing 90-minute discussion.

The program, tellingly, is called “Honest to God.”

“This is an essential time to focus on how key leaders are influenced by faith,” said Jan Smith, a Cathedral congregant who is active in Cathedral outreach committees. “The Washington National Cathedral brings people of all faiths together in this important new series as we all seek truth and inspiration.”

The inaugural session of the series features three prominent, thought-provoking personalities of diverse religious backgrounds and the occasional political controversy sharing how their faith has influenced their thinking and their actions.

“Honest to God” is open to the public but registration and a $15 ticket are required. Find more information about reservations here.