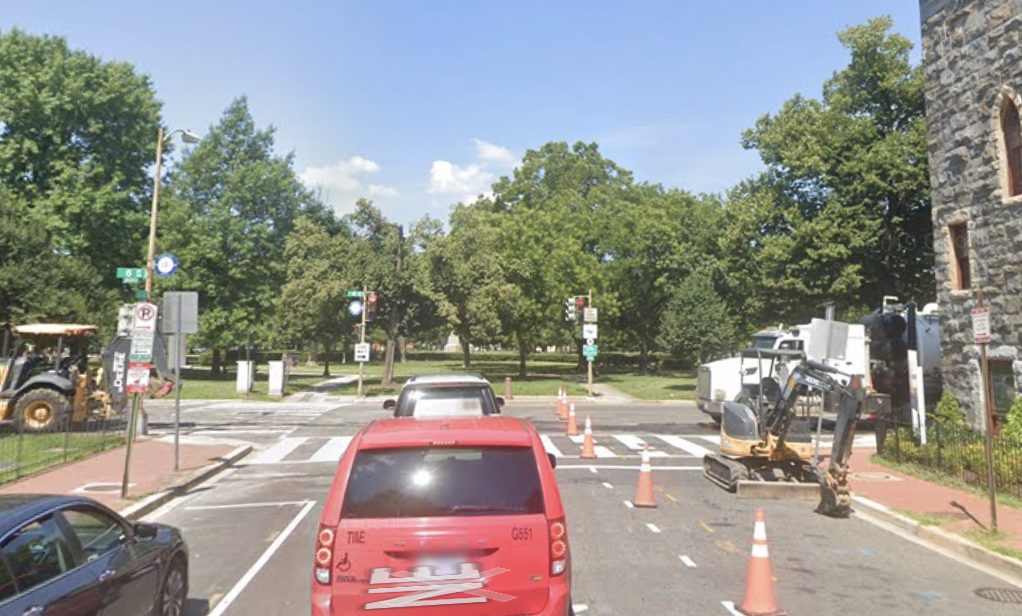 Another Capitol Hill oddity is right off Stanton Park. The right turn off of C St NE: is it two turn lanes divided by a bike lane, or just one lane? If you want to turn right onto 6th Street NE and then an immediate left onto Maryland (see the red dashed line below), which lane should you turn from? END_OF_DOCUMENT_TOKEN_TO_BE_REPLACED 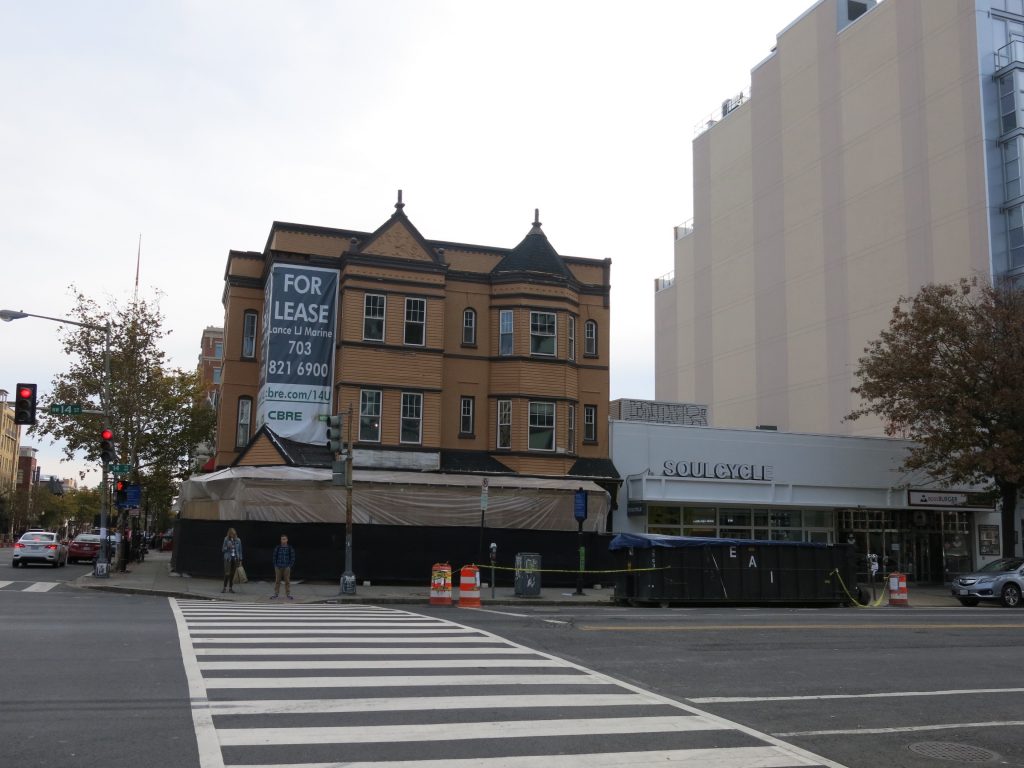 Wondering if you know what’s happening at 14th and U. We used to have a turn signal there. It was removed a while back.

Now there is regularly a police officer there directing traffic. Last Saturday, I was out running errands by foot. The police officer was YELLING at pedestrians not to cross, even when we had the light, so that she could let cars turn left. It wasn’t particularly backed up. It meant that a lot of people were confused about whether they could cross and would then try to run while she was letting people go. It was a hot mess.

This is a highly trafficked pedestrian area. Why is DDOT prioritizing car traffic there? If they want people to cross safely and drivers to turn left safely, this is not a good solution. Maybe we need that fancy intersection they have in Chinatown.” Ed. Note: There’s also a barnes dance crossing in Columbia Heights. Not a bad idea here! 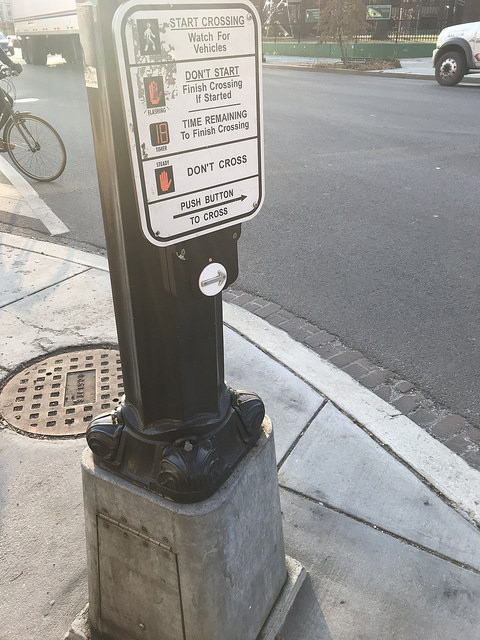 Many readers probably know that the cross walk on R st NW and Florida is already not great to begin with — Florida is a busy street and the left turning cars get confused by the diagonal intersection. There’s only one crosswalk instead of two to cross on R, and the pedestrian light only turns to walk if you push the button. If you don’t push the button, the walk sign never comes on, and the green traffic light stays on for only about half the time it would otherwise, so there’s not enough time to cross the street.

About a week ago or so, the crosswalk button got stuck in the “on” position, and now it doesn’t seem to be triggering the walk signal at all. So it’s now impossible to get a crosswalk light to cross Florida. I’ve been running across when the R St traffic light turns green, but only get about halfway across the street by the time it turns yellow.

I wrote to 311 and haven’t heard back. I hope you can bring attention to this dangerous traffic situation!“ 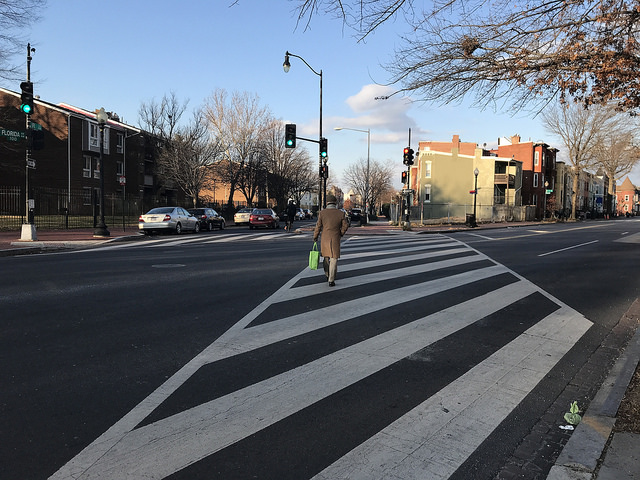 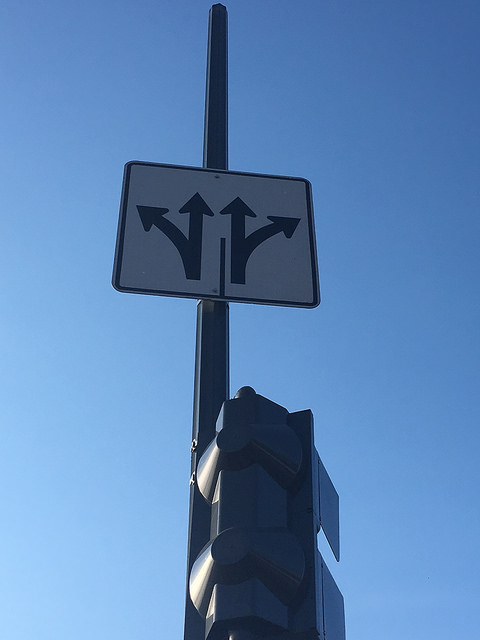 I was recently in a car accident in a very confusing and crappy intersection in dc (as we all know street signs around here aren’t always the clearest) (see the many stories on popville re: parking and other street signs).

The intersection in question is the “round about” from Montana ave heading south towards West Virginia ave and the exit towards Montana ave SE. In this same “round about,” and the reason for the quotations, is that there is also New York ave running through the middle of that roundabout (see below images). 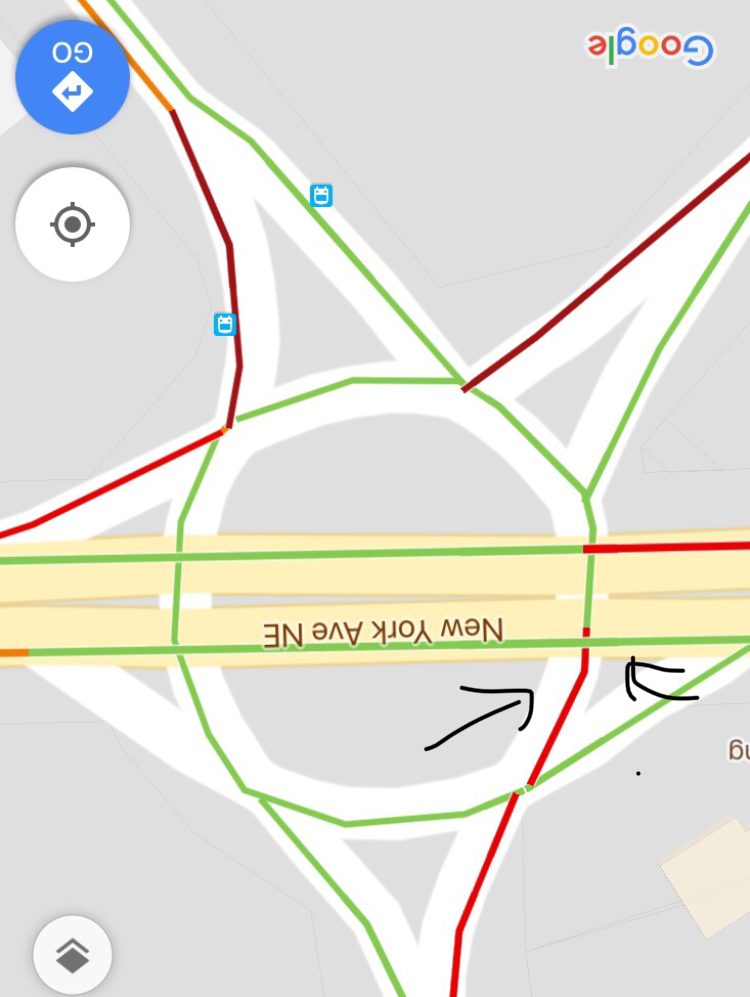 So please imagine with me that you are at the red light on Montana ave and New York ave (see image below – between these two arrows). Yes, the map is backwards bc google maps puts everything headed north and the incident in question happened heading south. So I reversed it!

Right above the red light there is this street sign above those *two* lanes of traffic.

Seeing as there is no street names correlating to the arrows, as we all well know that dc has done with other traffic circles, one would safely assume a few things: a) the inside lane can go left and straight *only*; b) the outside lane can go right and straight *only*; c) the straight for those two lanes is the same straight, since the arrow isn’t a different size or doesn’t veer off sooner, thus the “straight” is in reference to *continuing* straight from Montana all the way through back onto Montana; d) the left for the inside lane could be argued to either turn left at the inside of the roundabout or to turn left directly at the light onto New York; e) the right for the outside lane is to exit onto West Virginia ave, and is the only legal way for a car to exit onto West Virginia ave; f) the right for the outside lane is not to turn an immediate right onto New York ave as there are street signs directly in front of that lane that say “no right turn” (see below) and there is a separate lane that veered off the circle to exit Montana to New York ave earlier, well before the posted sign above regarding the two lanes. Okay phew! 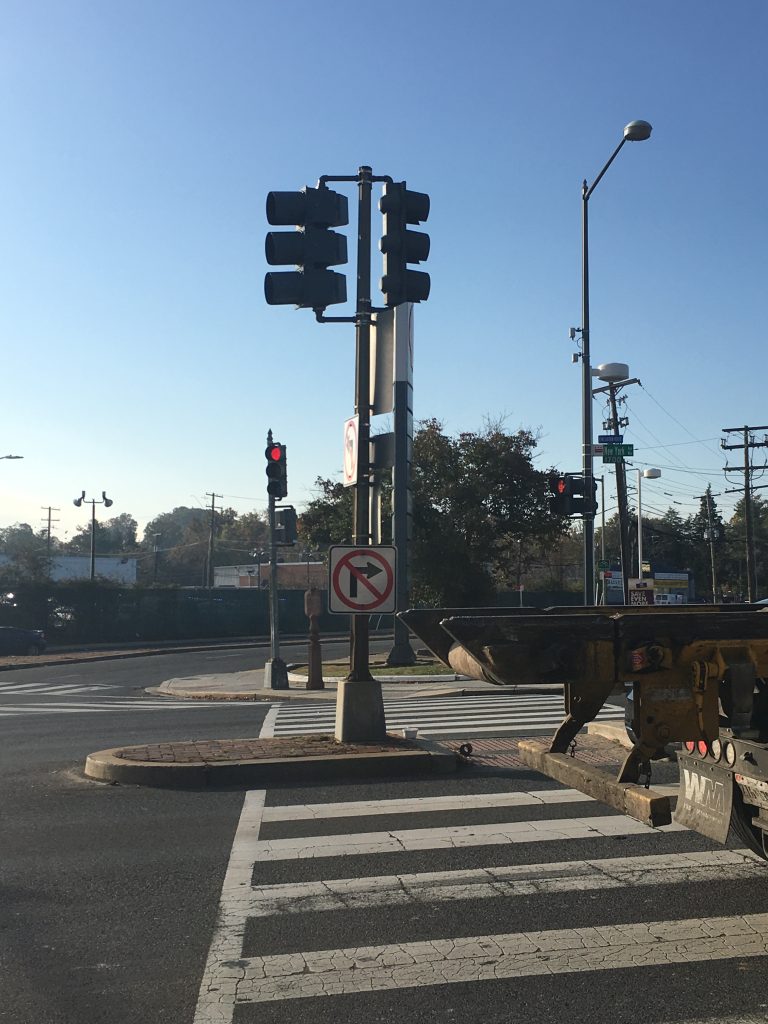 Now that we’ve cleared up all the possibilities, and explained how entirely f’in confusing this intersection is, let me explain what happened.

Myself and another driver were at the light on Montana ave, heading south, towards Montana ave. I was in the outside lane, she was in the inside lane. Right as we approached the exit for West Virginia ave, the other driver realized she needed to exit (or was supposed to exit and forgot) and tboned me on my drivers rear side. END_OF_DOCUMENT_TOKEN_TO_BE_REPLACED 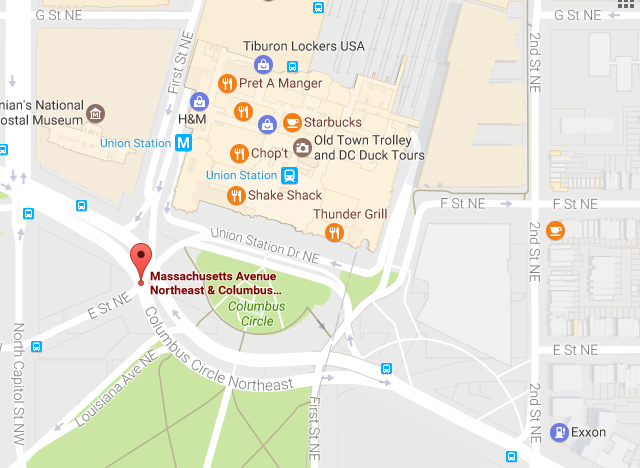 I wanted to alert you to a potential traffic issue I’ve been noticing more than more. There’s a very weird intersection around the southwest corner of Union Station, where the cabs/cars/buses that have dropped off people in the front come out to either Mass Ave (turning left or right) or going straight down E Street. If you look at the map, though, there’s also a small lane that comes out of First Street NE. The traffic lights are not well angled, so when the Union Station lane gets the red light, the First Street lane gets green, but I’ve seen several times cars (cabs in particular) from Union Station mistaking the second green as theirs, and driving out. What’s worse is that there are generally a lot of bicyclists in the First Street lane, and I worry eventually someone will get hit.” 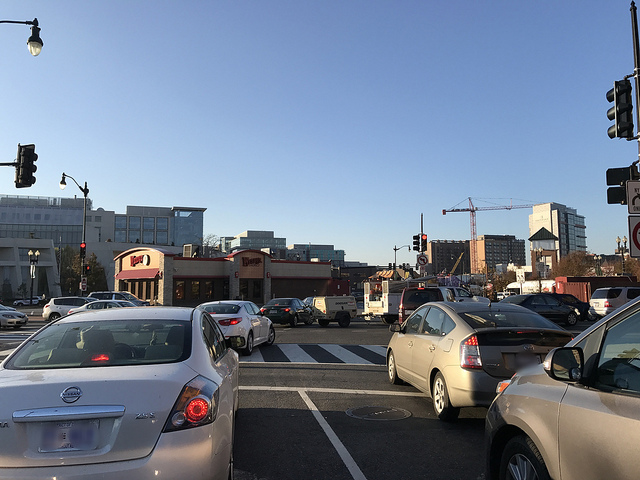 Thanks to a reader for passing on:

“DDOT has proposed their plans for “fixing” the Dave Thomas Circle at Florida/New York/Eckington Place. They presented their plans on Tuesday night in NOMA and are looking for the public’s feedback by April 21st.”

Given how maddening Dave Thomas Circle has become – which of the five proposals below do you like best?

Which do you think they’ll go with?

Check out all the proposals after the jump. END_OF_DOCUMENT_TOKEN_TO_BE_REPLACED 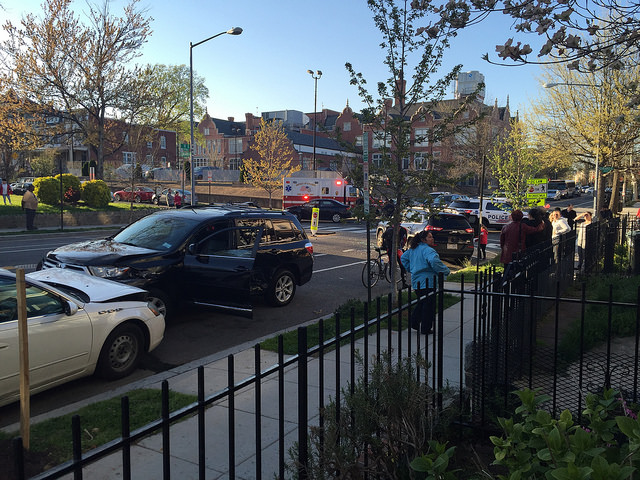 I was happy to read about the positive response from emergency workers and bystanders after the four-car accident at 11th and Girard yesterday. As someone who lives nearby I find myself wondering why the obvious underlying cause of most accidents at this problematic intersection hasn’t been addressed: the lack of a four-way stop.

This is the only intersection on this stretch of 11th where there’s not a four-way stop or traffic light, which causes confusion for drivers going in all directions. Drivers on 11th will sometimes anticipate a stop sign that isn’t there and get rear-ended, and drivers crossing on Girard think there’s a four-way stop and often just drive out into oncoming traffic. There are frequent fender benders, near misses involving cars/cyclists/pedestrians, and every several months a major accident like the one yesterday. A car flipped at this intersection just this past November.

It’s not as if adding a four-way stop would have some major effect on traffic flow since there are lights or stop signs on every other block, and installing one seems like it must be cheaper than repeatedly sending emergency response teams.

I’ve put in a request for a new stop sign using DC’s service request site under Sign New Investigation. Has anyone used that service with any success? Any other advice on getting DDOT to install stop signs at dangerous and accident-prone intersections?” 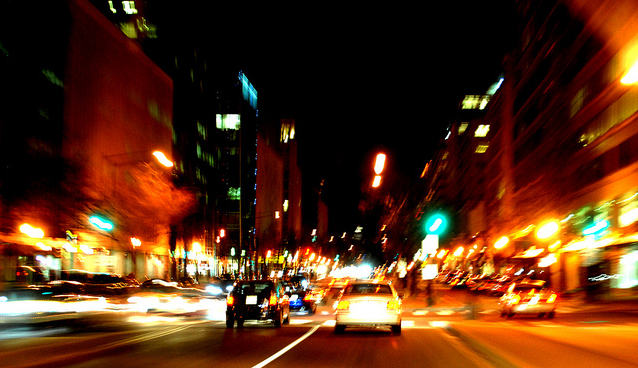 I just moved back to the area and am lucky enough to have my car. I live right in between DuPont, Logan, and U street. I’m very grateful to have my own method of transportation to get around, however: my frustration with the traffic and street layouts in this city are insurmountable. I get frustrated even just thinking about it, my nerves are totally shot every time I get in the car. Instead of this just being an unhelpful rant, I’ve thought a lot about this post and instead want to write about not only the problems, but possible solutions. 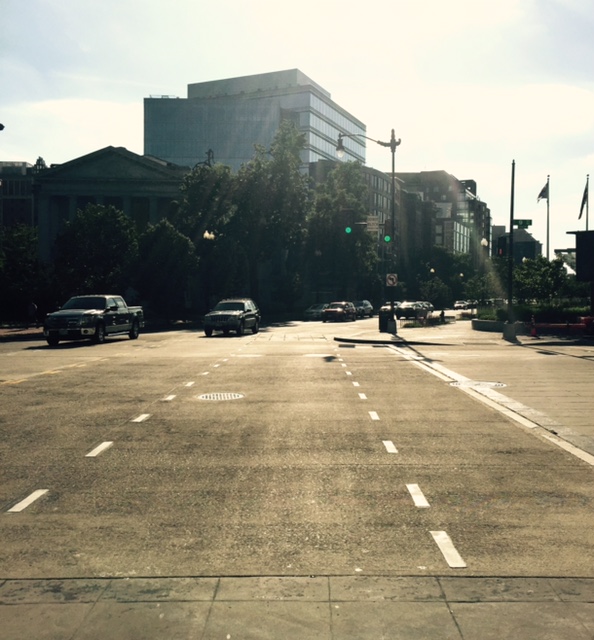 Can you ask your readers if they have any experience with the hazards of an intersection near the Convention Center? Attached is a photo looking across the intersection as a driver faces west from Mt. Vernon Place, NW (in front of the convention center), across 9th St. NW towards Massachusetts Ave. NW.

The design of the intersection forces two lanes of traffic to make a relatively sharp right onto Massachusetts Ave. as they cross 9th Avenue. The intersection narrows considerably at the turn (in fact the two lanes almost appear to narrow to one lane of traffic).

Recently, a driver of a car to the left of me crowded my lane in an effort to avoid cars coming in the opposite direction; I moved my car to the right, hit the curb, and slashed both my tires. I stopped at the Marriott Marquis and the employees there told me that the exact same thing happens at least once, and often twice, a week. This seems like a disaster waiting to happen, especially for pedestrians waiting on the northwest side.

Feedback would be helpful for me to forward to DDOT.” 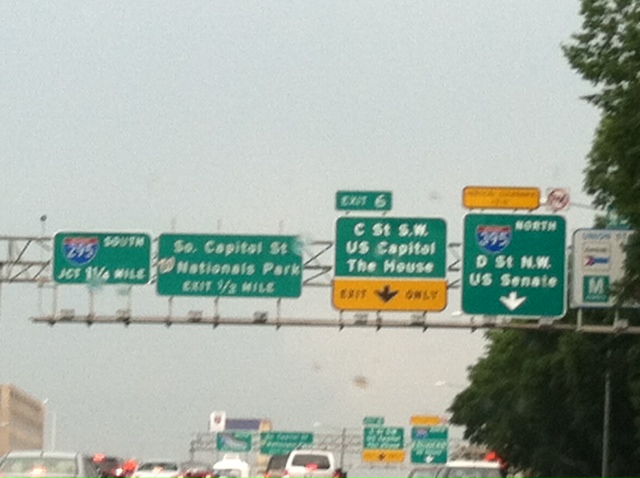 Dysfunction Junction chronicles the most forlorn, baffling, and wonderful crossroads of our fair city. The column is written by Ben Ball, a transportation nerd in his spare time. He lives in LeDroit Park. Ben previously wrote about Florida/U St and 7th St/Georgia Ave.

This stretch of highway is proof positive that the inner loop was a terrible idea.  Not only does it slice poor old Southeast in two, but the signage when you come in from Virginia is atrociously misleading.  If you’ve made it to exit six, you’ve already had to make several rapid fire decisions with little or no warning.  (Left exit to 14th St!  Right exit to 12th St!)  Then the fun begins.

At exit six, you have a hugely complex and counterintuitive decision to make.  Option one is C Street SW/The House/US Capitol.  C Street SW and the House of Representatives are of course on opposite sides of the Capitol building.  It might make sense if that was the only option.  But then there’s option two – 395 North/D Street NW/US Senate.  D Street NW and the Senate are also on opposite sides of the Capitol building.  Shouldn’t C Street SW and the Senate be on the same exit?  And shouldn’t D Street NW and the House be on the other exit?  It just doesn’t make sense.  Before my head explodes, let me also point out that the House, Senate, and Capitol all refer to the same building. END_OF_DOCUMENT_TOKEN_TO_BE_REPLACED