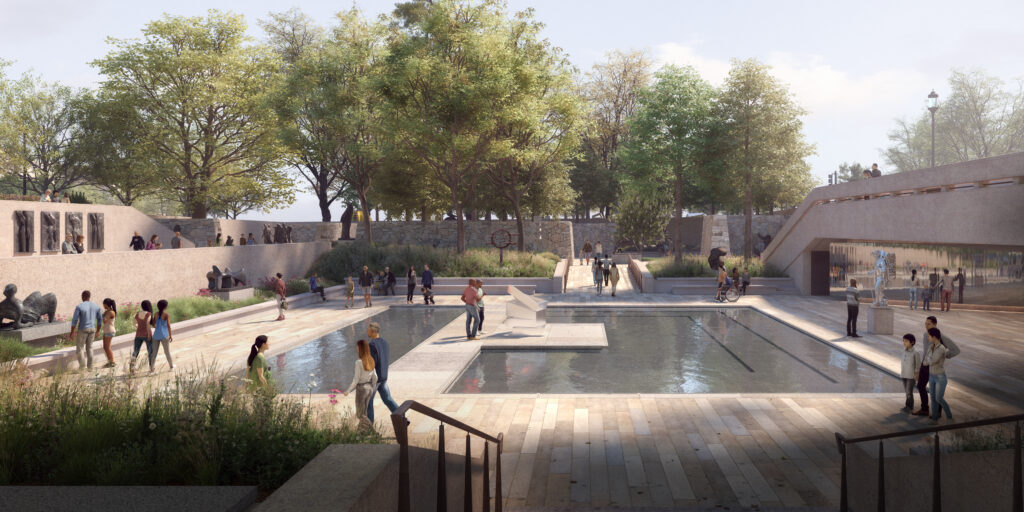 Rendering of the central garden courtesy of the Hirshhorn

Ed. Note: I’m told they expect to break ground next fall and reopen in 2024-2025, the Hirshhorn’s 50th anniversary year.

“We welcome these approvals, which have followed a robust public process that allowed us to hear and incorporate the views of so many who care deeply about the garden,” Hirshhorn Director Melissa Chiu said. “The final design by Hiroshi Sugimoto, the renowned Japanese artist and architect, will enhance the experience of millions of Hirshhorn visitors in coming years.”

With the approvals, the Smithsonian Institution and the Hirshhorn Museum will move forward with site development plans proposed in the spring of 2019. The plans were reviewed and revised in a series of eight public consultation meetings which addressed the museum’s mission, as well as the sculpture garden’s architectural legacy and landmark status.

Sugimoto’s design accomplishes two important goals: making the Sculpture Garden more accessible and inviting to the 30 million people who pass it on the National Mall each year and offering flexible venues for the kinds of large-scale sculpture and time-based and performance works that are the hallmarks of contemporary art today.

The entrance on the north perimeter will be broadened from 20 to 60 feet, widening sightlines into the Sculpture Garden and doubling the number of ramp entries. On the south side, the design will reopen the underground passageway connecting the Sculpture Garden to the Hirshhorn’s distinctive circular plaza and museum building.

The Hirshhorn is the only Smithsonian museum directly integrated into the National Mall. The revitalization project will connect the 1.5-acre garden on the National Mall with the 4-acre plaza surrounding the museum, which welcomes 1 million visitors annually. The project will address long-overdue repairs to infrastructure, increase the Hirshhorn’s display of modernist sculpture in the east garden by almost 50 percent, and honor the vision of landscape architect Lester Collins, who redesigned the garden in 1981, by expanding the number of native plantings in the garden by 70 percent, thus offering a 150 percent increase in shade and seating.

“Our vision for the Hirshhorn, the only national museum of modern art free and open to the public year-round, champions artists first and foremost,” Chiu said. “The art of our time is often immersive, interactive and ready to break free of walls, and we believe that a museum of the 21st century needs to be responsive to the art being made today.” She noted that the Hirshhorn’s original architect, Gordon Bunshaft, took the same approach when he designed the museum half a century ago.

Sugimoto has adapted and reenvisioned the garden, which Bunshaft said was inspired by Japanese gardens, with a thoughtful, considered and contemplative approach, Chiu said. “Sugimoto’s vision is very much aligned with the garden’s original influences but takes a view toward the future. Our next chapter is one that is more inclusive and accessible and elevates the experiences and voices of today,” she said.

Sugimoto has had major exhibitions in museums and galleries throughout the world, including the Museum of Contemporary Art in Los Angeles, the Metropolitan Museum of Art and the Serpentine Gallery. His work is held in leading collections, including the Museum of Modern Art, the Solomon R. Guggenheim Museum, the Centre Georges Pompidou and the National Gallery in London. Sugimoto has had a long relationship with the Hirshhorn, beginning with his first major U.S. retrospective in 2006 and, most recently, his innovative redesign of the museum’s lobby. He has designed a variety of indoor and outdoor spaces that create a beautiful linkage between art and architecture, including a series of installations at Versailles (2019), the Atrium Garden for the Japan Society in New York (2017) and the Enoura Observatory for the Odawara Art Foundation in Japan (2017).

About the Sculpture Garden

Since opening in 1974, the Sculpture Garden has seen layered periods of significance, including Bunshaft’s original design and Collins’s subsequent 1981 redesign. This next phase of the Sculpture Garden–the first comprehensive update since in more than 40 years–under Sugimoto’s stewardship will allow it to meet the needs of the 21st century and add to the museum’s palimpsest of remarkable design. Sugimoto’s deep roots with the Hirshhorn extend back to 2006, when his career survey exhibition was held at the museum. Years later, his thoughtful reconsideration of the museum’s lobby transformed the space into an inclusive, town square-style meeting place. Now he will continue the Hirshhorn’s redesign journey, with an anticipated opening of the revitalized Sculpture Garden in 2024-25, the Hirshhorn’s 50th anniversary year.”