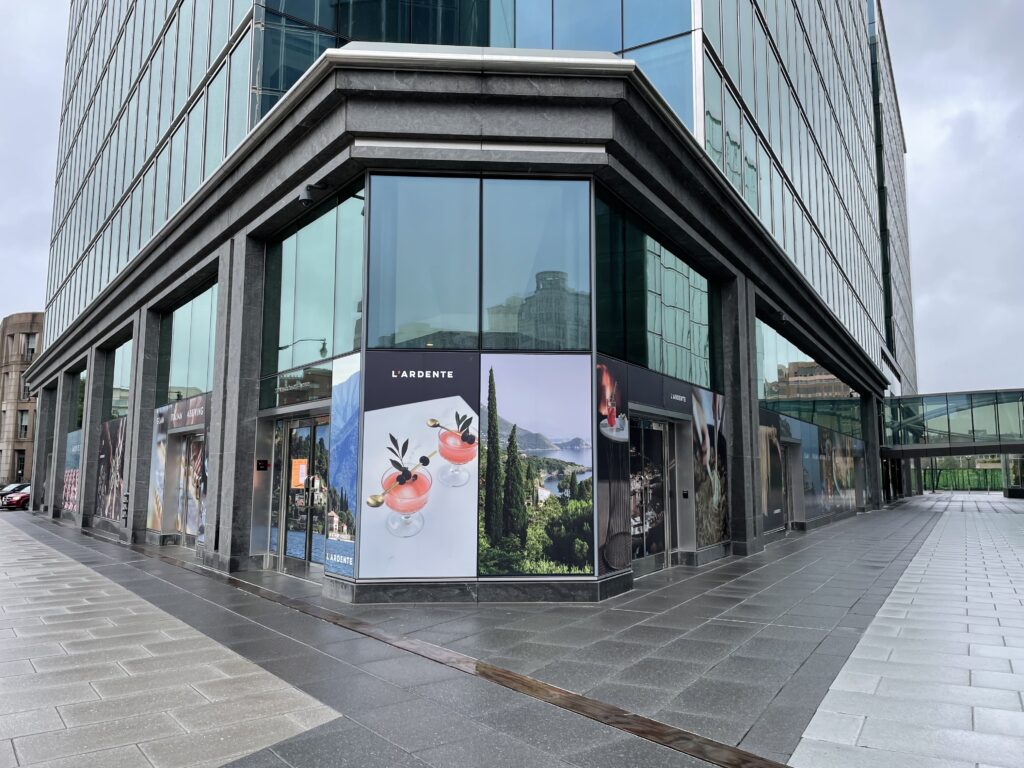 “Today, chef David Deshaies and Restaurateur Eric Eden announce an October 5 opening for L’Ardente, their stylish contemporary Italian restaurant located at 200 Massachusetts Ave. NW in Capitol Crossing, the ultra-modern green development in downtown D.C.’s East End neighborhood. The 9,000 square foot space will be the first operational restaurant in the development, with 180 seats, including 20 at an elevated island bar and private dining areas seating up to 25. An expansive all-season patio, conditioned with misters and heaters, will follow soon after opening. L’Ardente will initially open for dinner Monday through Saturday, with lunch and brunch service to be added shortly after.

“L’Ardente is going to be all about democratized luxury,” Eden said. “We’ve built a beautiful space, and David is using the finest imported and local ingredients, but we want it to feel comfortable and approachable. We aim to reflect the glorious contrasts of Italy itself: haute yet simple, glam yet rustic, indulgent yet restrained.”

The team Deshaies will lead in his role as culinary director includes chef Leena Ali, a longtime collaborator, who will head up the kitchen as chef de cuisine. Chef Logan Griffin, formerly of Tino’s Pizzeria, will serve as head pizzaiolo, while Andy Clark, with previous stops at Napoli Pasta Bar and Fiola, will be responsible for crafting L’Ardente’s considerable pasta selection. The pastry program will be managed by chef Manabu Inoue, who has cooked under Masaharu Morimoto and Joël Robuchon, and will also oversee pastry at Love, Makoto, the Japanese food hall set to open in Capitol Crossing in early 2022.

The heart of the kitchen will be an imported Spanish wood-burning grill, from which a parade of live-fire cooked dishes, including a heroic, 30-day-dry-aged bistecca alla Fiorentina, and a plate of grilled prawns served with black garlic, pomegranate molasses and Calabrian chilies. From the pizza oven, Griffin will be producing sourdough crust pies ranging from a classic margherita to the Octaroni, topped with smoked octopus, aged pepperoni, basil pesto and delicate Fior di Latte cheese. The pasta offerings will include ravioli with goat cheese, ricotta and peas, as well as the signature L’Ardente lasagna, with beef sugo, truffle, and sottocenere cheese.

The beverage menu includes an extensive list of Italian wines and classic cocktails, as well as a selection of imported Italian and local beers. Beverage manager Roberta Scampoli will oversee the bar program.

Co-owner Eric Eden worked closely with architecture and design firm HapstakDemetriou+ to create an airy, rich interior that matched the kitchen’s philosophy of accessible luxury, while Virginia Shore, of Shore Art Advisory, guided the restaurant in its selection of art displays that reinforce the passionate yet smooth atmosphere. Glittering chandeliers float below wooden farm beams, wisps of fragrant smoke linger inside a gold-plated pizza oven and sumptuous fabrics mirror the kitchen’s impeccable ingredients. The main dining room showcases ethereal Mediterranean blues, sparkles with gold leaf in Murano glass chandeliers, and is decked in shimmering, iridescent Missoni drapes. Entering the bar, guests will transition into a space of welcoming earth tones bound by Kelly Wearstler wallpaper on the back wall and fine mohair banquettes with Italian bullhide seats. Bar stools are finished in shagreen beneath a sculptural, mirrored piece by N.Y.-by-way-of-D.C. artist Graham Caldwell. The private dining rooms, which are accessible by a discrete rear entrance, are livened up by bright, floral Danish carpets, framed in warm walnut millwork with brass fittings, and decked out in warm, Knoll mohair upholstery.

As culinary director, Deshaies oversees all food and beverage operations at L’Ardente, Unconventional Diner, and Central Michel Richard. Deshaies also serves as Executive Chef at Unconventional Diner, in the Shaw neighborhood of Washington D.C., which he opened with fellow L’Ardente partner Eric Eden in 2017. Under his watchful eye, Unconventional Diner has earned several honors, including placements in Tom Sietsema’s annual dining guides, Washingtonian’s Top 100 lists and inclusion as a Bib Gourmand selection in the Michelin Guide to Washington, D.C. Deshaies was named Chef of the Year for 2020 by the Restaurant Association of Metropolitan Washington, and Unconventional Diner won Best Brunch in 2019. Deshaies first came to the District of Columbia in 2001 to work under the great Michel Richard at Citronelle, rising through the ranks to Executive Chef, and eventually helping open new restaurants in D.C., Las Vegas, and New York City. Before beginning his American adventure, Deshaies worked in France and Spain at acclaimed Michelin-starred restaurants, including Le Pralong, La Cote Saint Jacques, and Restaurant Ses Rotges. He grew up working in a family-run restaurant in the Loire Valley of France.

Chef de Cuisine Leena Ali supervises all kitchen operations at L’Ardente, and, with chef Deshaies, is responsible for the restaurant’s contemporary interpretations of Italian classics. L’Ardente is not Ali’s first time working under Deshaies, their partnership goes back to Unconventional Diner, and before that Central Michel Richard. A graduate of L’Academie de Cuisine, Ali has spent time in the kitchens of Cairo’s Sky Lounge Restaurant, and Zaytoun Bistro in Towson, Md.

In his role as Sfoglino, Clark works closely with chef Deshaies in managing L’Ardente’s extensive menu of house-made pastas. Prior to joining the team, Clark served as chef de cuisine at Napoli Pasta Bar & Napoli Salumeria and before that at San Lorenzo, both in Washington, D.C. Previous stints include time under Chef Michael Friedman at The Red Hen and All Purpose Pizzeria, and under Fabio Trabocchi at Fiola.

Coming to L’Ardente from Tino’s Pizzeria, pizzaiolo Logan Griffith is the brains behind the restaurant’s gold penny-tiled pizza oven. The Culinary Institute of America graduate draws on his experience at the Cleveland Park neighborhood pizzeria, as well as a fine dining background that includes stops at Blue Duck Tavern and the Inn at Little Washington, to create a menu of pies that is equal parts accessible and elevated.

As Executive Pastry Chef, Manabu Inoue brings a deep understanding of Italian, French and Japanese dessert traditions, adding an international flair to L’Ardente’s menu of sweets. The Tokyo-native’s culinary journey has taken him across Japan, Europe and the United States, including positions with Starr Restaurant Group as regional pastry chef, as corporate pastry chef for Chef Masaharu Morimoto, and as executive pastry chef at the Intercontinental Hotel Los Angeles Downtown

In addition to serving as General Manager at L’Ardente, Micheli oversees the restaurant’s extensive beverage program. Prior to joining the L’Ardente team, Micheli was general manager at Washington, D.C.’s Dirty Habit, where he was honored with a nomination for Manager of the Year in 2021 by the Restaurant Association of Metropolitan Washington. He came to the District from Miami, where he worked with the SBE family at the SLS South Beach as general manager of Katsuya. His career in hospitality began in New York where he helped open and oversee WestHouse Hotel and later to manage The Park Central.”