From MPD: “MPD is on the scene of a confirmed shooting in the 600 block of O Street NW. Lookout is for a black Chevrolet SUV, last seen eastbound on O Street NW.”

“Detectives from the Metropolitan Police Department’s Third District seek the public’s assistance in locating a vehicle in reference to an Assault with a Dangerous Weapon (Gun) offense that occurred on Friday, July 23, 2021, in the 600 block of O Street, Northwest.

At approximately 10:24 pm, the suspect vehicle approached the victim at the listed location. An occupant discharged a firearm towards the victim. The suspect vehicle then fled the scene. The victim was transported to an area hospital for treatment of non-life threatening injuries.

The vehicle was captured by a nearby surveillance camera and can be seen in the photos below: 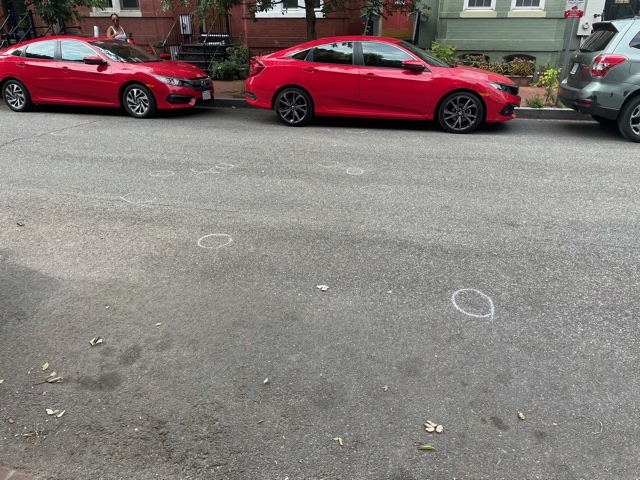 Other readers reported hearing shots fired around 1:15am on Wallach Place, NW:

“multiple bullets sprayed on Wallach Pl NW tonight, very close to the scene of the shooting outside Mexicue yesterday. Major response around 1:15am. You can see the white circles for bullet casings outside this morning on Wallach (I think 16 total). I don’t know why a crime alert wasn’t sent out, maybe because no one was shot? Wanted to get the word out – just because no one was shot, I think people should know of the gunfire so close to Thursday’s shooting.”