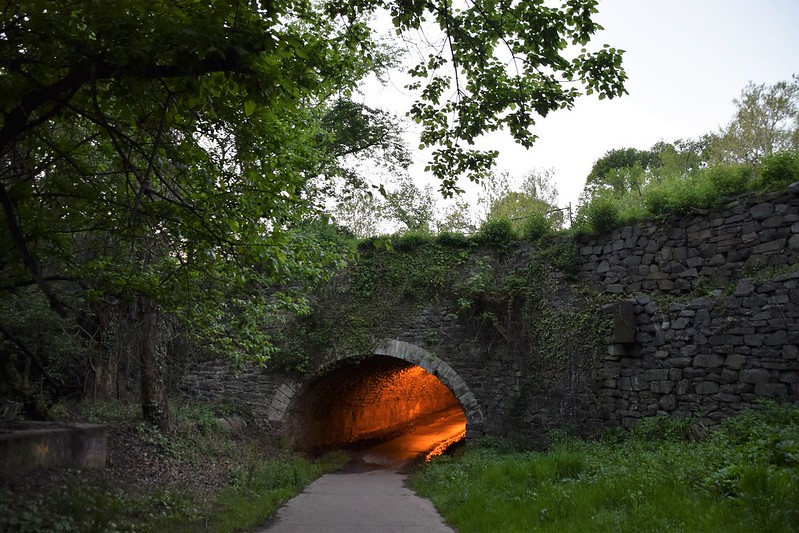 I am writing to report a really scary incident that happened to me on the Capital Crescent Trail.

I was biking last night around 9pm on the trail toward Georgetown and it was dark outside (I usually don’t bike this trail that late but today I happened to start my ride later and I found myself in the dark). I was actually feeling really good because I was going faster than I normally go and I was actively thinking how proud of myself I was. All of a sudden – the Key bridge by the entrance of the trail in sight – a rabbit jumps out in front of me. I quickly dodge it but the quick motion causes my chain to come off. I am kinda laughing at myself at how foolish I was to almost be taken out by a rabbit- when I notice two men approaching me and shouting drunkenly in the dark (coming from Georgetown). Living in dc for 5 years I (sadly) am pretty used to this and so I ignore them and put my chain back on. Then I notice they are sprinting towards me and yelling “turn off your light you f*cking n****r” over and over again. I quickly jump on my bike and start biking but they get really close and one of them raises his fist at me about to strike. I scream “I am a girl”- which doesn’t exactly make sense but all the same my high pitched scream causes him to pause the second I need to speed away.

I am close to Georgetown so I find the first cop I can see to report what just happened. To my surprise- the cop rolls his eyes at me. He asks me what they look like and I tell him they were two men (maybe white) but I was almost attacked and it’s dark so I honestly have no idea what they look like. He continues to roll his eyes as me and asks why I am reporting this if I don’t know anything. I am extremely shocked and finally he says he will report the issue and then bikes in the opposite direction and tells me to not bike back there.

There are so many things wrong with this story..

1) I happen to be a white woman – and so I don’t know if the man who almost punched me paused because he realized I was white and not black or if he was just taken aback by my scream… But extremely terrifying to imagine if he didn’t pause and disgusting/ sad/ terrifying to see the hate actively shown towards me when he thought I black.

2) Wild that after reporting this story, the reaction from this policeman was to criticize me and roll his eyes.

3) Yes – I do understand the increased risks of biking late at night (especially as a woman) and I normally do not… but also that doesn’t make the men’s behavior okay- and also frustrating that as a woman I can’t train at night.

Anyway- this was long- and thank you for reading it. I wanted to share this story as a reminder for everyone to be careful out there.”

More Stories
Notes from your Neighbors – “playing hide and seek with my (trash) bins” editionToday’s Rental was chosen because I wanted to see what a “Penthouse” in a converted Row House looked like.