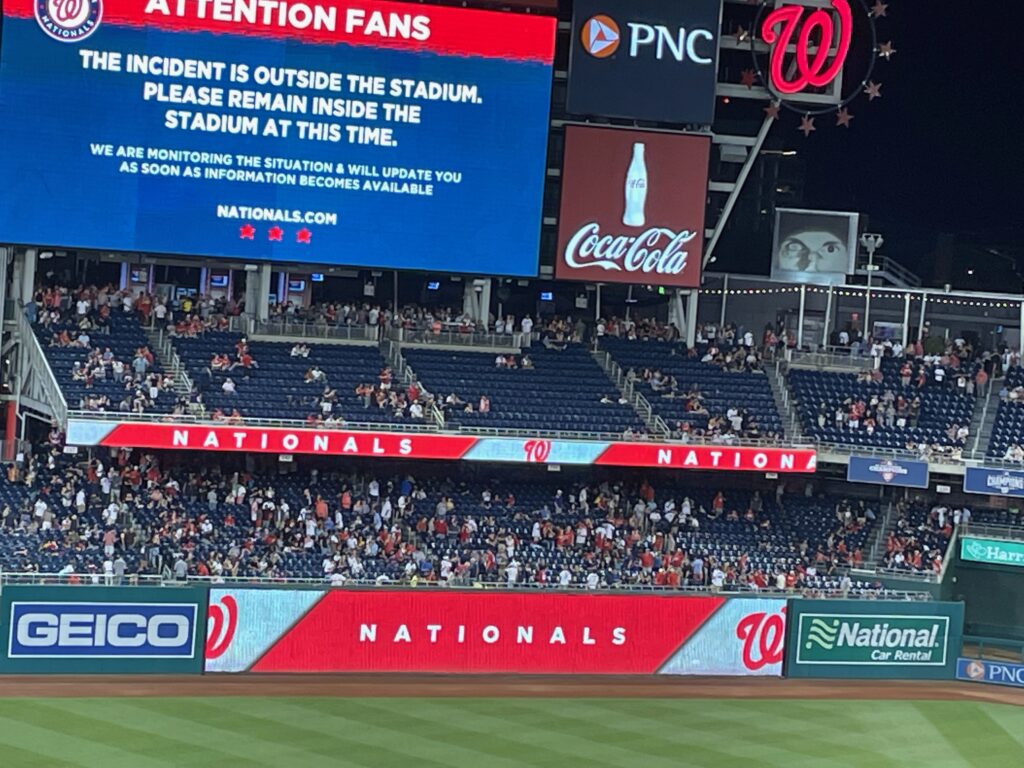 “As a result of the shooting incident, tonight’s (Saturday) Nationals game has been suspended.” 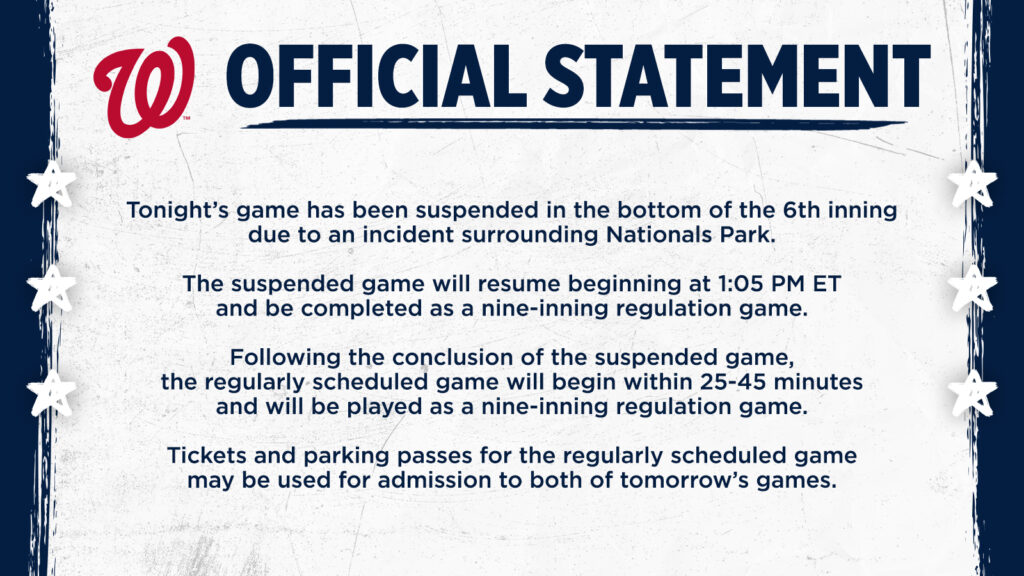 “At approximately 9:30 PM, 1D officers heard sounds of gunshots coming from S.Capitol & O Street SW. 1D officers responded to the location and found 1 adult female victim, suffering from a graze wound to her back. Minutes later 1D officers got information that two additional victims drove themselves to a local hospital and received treatment for injuries sustained at this location. All of the victims are in stable condition. The lookout for the involved suspect vehicle is for a dark colored sedan, unknown make, model or tag number. Last scene fleeing at a high rate of speed southbound on S. Capitol Street SW. This incident is not related or has anything to do with the Nationals stadium.

The First District detectives are actively investigating this incident. If any member of the public has information or video of the incident, please contact the First District Detectives office at 202-299-2025, or the Metropolitan Police Department’s Command Information Center at 202-727-9000.” 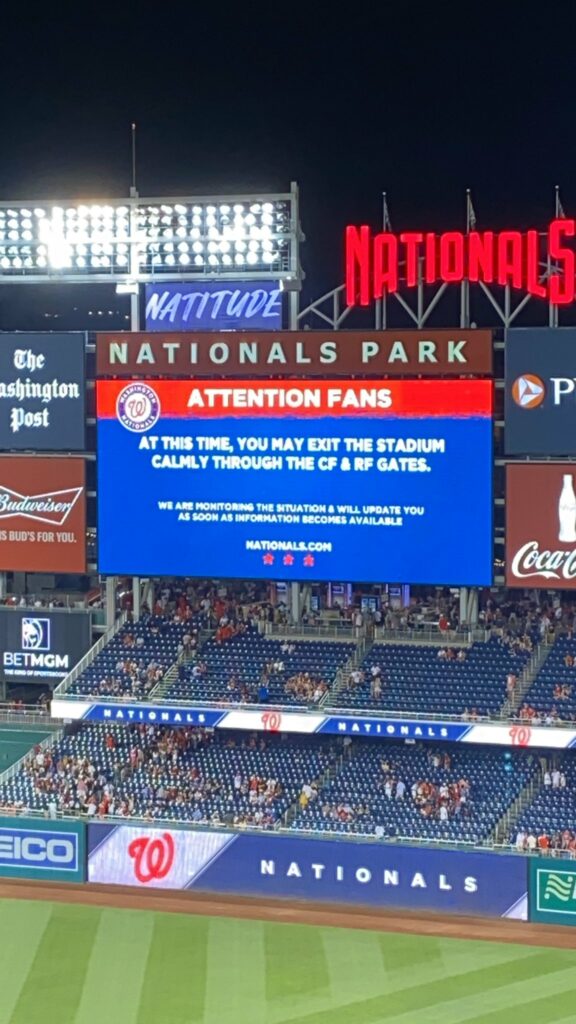 “A shooting has been reported outside of the Third Base Gate at Nationals Park.

Fans are encouraged to exit the ballpark via the CF and RF gates at this time.

We’re working with law enforcement to provide more information as soon as it becomes available.” 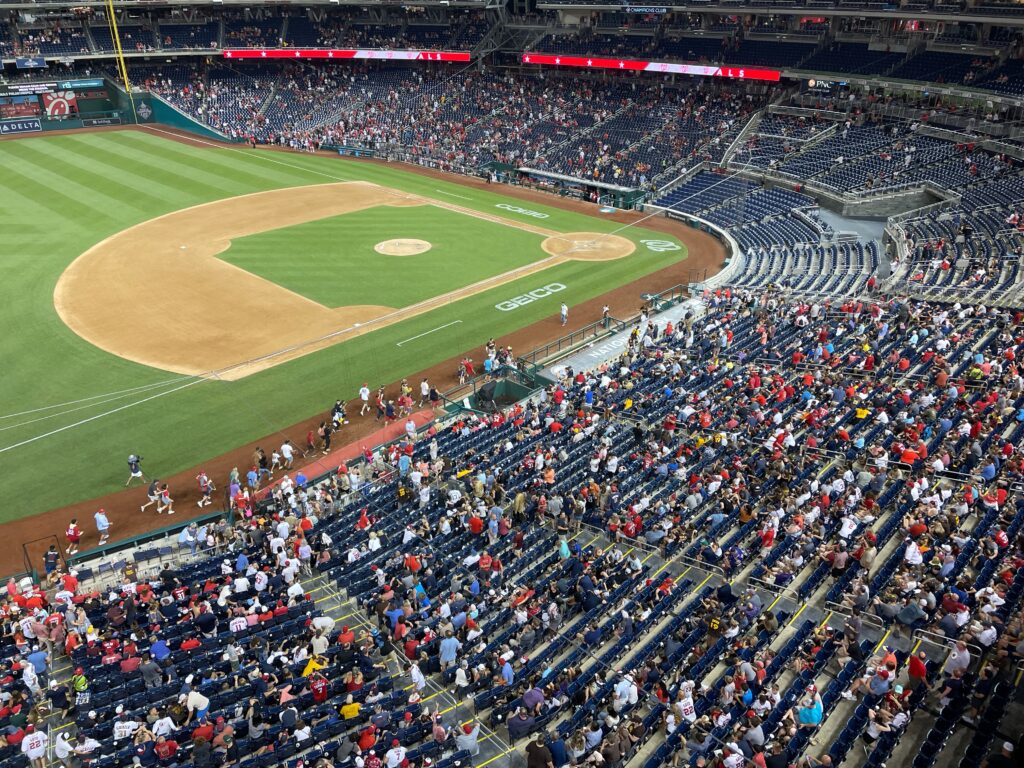 “What sounded like an automatic weapon has fired about 15-20 shots at the game. Initially it sounded like it was right behind us. We were in the 3 rd tier of left field. Now it’s being reported that it is outside of the stadium. Teams were evacuated and there was a mass exodus out of the stadium. There is a huge police presence outside the stadium behind left field and we were eventually directed to leave via right or center field. Very scary.”

“Anyone know what is happening at nationals park? In crowd, players all off field, people running down into stands from concourse on 100 level”

“sounds like drive-by shooting of left field gate at Nats stadium. Heard the shots and very quick response of MPDC”

“In the stadium they told us to stay inside because the incident was outside the stadium. Very very scary scene in here though.”

“I was there- Padres players didn’t just grab their families, they ushered fans into the Padres dugout as well. And in that terrifying situation, it’s incredible. And I didn’t exactly see Zimmerman or Soto out there helping Nats fans.”

“The police are advising people shelter in place. We’ve been evacuated from a patio to a top floor of a restaurant on Water St SE”

I am here. They are saying incident was outside of the ballpark. Video: pic.twitter.com/tRNZga5UXW

“Joint Statement by the District of Columbia and the Washington Nationals

Today, Mayor Muriel Bowser and Mark D. Lerner, Managing Principal Owner of the Washington Nationals, issued the following statement after the shooting outside of Nats Park on July 17.

“We stand together against senseless acts of gun violence in the city we love. Gun violence — no matter where it occurs in our city — is unacceptable and will not be tolerated. The Metropolitan Police Department (MPD) continues to work closely with National’s security to ensure the continued safety of residents, fans, workers and all individuals in the area.

“While MPD’s investigation is ongoing, it appears the incident involved a dispute between individuals in two vehicles. MPD does not believe the Washington Nationals, the ballpark or fans were the target. Anyone with information about those involved is asked to contact MPD at 202-727-9099 or text 50411.

“We appreciate the tremendous cooperation of the fans at Saturday night’s game who did all that was asked of them under very stressful circumstances, and the police and the fire emergency medical personnel who responded. We are committed to a safe, enjoyable experience for all.”