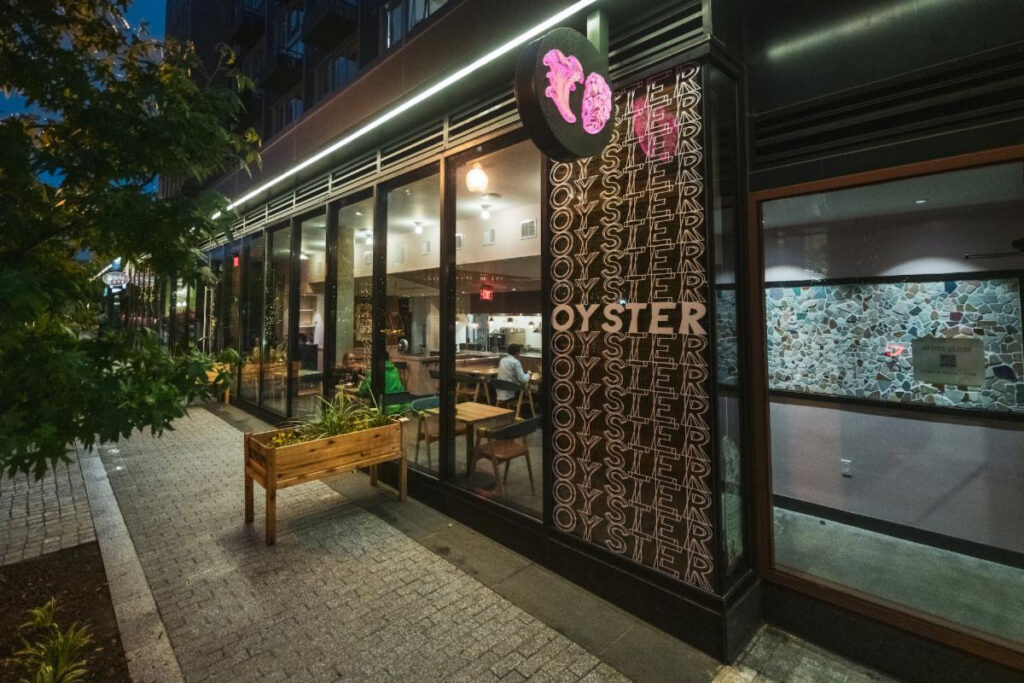 “After more than four years in the works, sustainable, plant-forward restaurant Oyster Oyster will finally open its doors on Thursday, June 17, becoming one of DC’s (and the country’s) most exciting post-pandemic restaurant openings.

Oyster Oyster is a forward-thinking culinary project from restaurateur Max Kuller (Estadio) and Chef Rob Rubba (formerly of Hazel), who years ago, developed a friendship based on a shared food and dining philosophy. Having both dedicated themselves to a vegetarian diet (Max for 24+ years, and Rob for 3+) and looking toward an answer for food in the era of climate change, Oyster Oyster was born.

The restaurant centers around sustainability at its core: from sourcing, to operations, to design. The name “Oyster Oyster” refers to both bivalves and mushrooms — two foods which play vitally important roles in the environment and enrich their local ecosystems.

“The whole restaurant is a celebration of sustainability,” says Kuller. “A celebration of the farmers and producers doing it right. We’re more mission-focused than specifically plant-forward or centric. It just so happens that vegetables and oysters happen to be some of the most sustainable proteins and foods in the world.”

While Oyster Oyster was expecting to open within just days of when the pandemic began, the team pumped the brakes to keep staff and potential guests safe, and adapted with a more casual (temporary) version of its vision. They offered take-out farm dinners, playful pizzas and sandwiches, and eventually offered limited patio seating in the interim, until they could eventually safely open the restaurant they envisioned all along. At long last, Oyster Oyster will debut on June 17.

A vegetable forward restaurant, Oyster Oyster offers micro-seasonal menus that highlight the bounty of the Mid-Atlantic with farms who share their ethos for stewardship, environmentally-beneficial oysters from the Chesapeake, and locally-foraged mushrooms.

Everything is made in house, from freshly-baked breads, to kombucha and pickled and fermented vegetables. In addition to its vegetarian offerings, the restaurant also offers vegan options.

Each year’s menus will be organized into several “micro-seasons,” some of which may be available for months, or merely weeks, showcasing the peak harvested bounty.

“To think there are only four seasons is foolish, especially in the region we live in,” says Chef Rubba. “I always say, you have to grow food to know food. To know the life cycles of plants to be able to use them to their fullest. We hone in on these micro-seasons so we can showcase these ingredients at their very best.”

Oyster Oyster will open with its SOLSTICE menu: a 1.5 month-long celebration of early- to mid-summer produce, such as young growths, herbs, tender greens, chanterelles and local Virginia pecan truffles.

Later in the year, guests can look forward to other seasonal menus showcasing fall harvest and special occasion holiday treats.

Wine is the focus at Oyster Oyster — sustainable, organic and biodynamic wines, to be specific. Wine director Sarah Horvitz, who has worked with Kuller for many years, highlights environmentally-responsible producers who farm sustainably in their vineyards and make wines with as minimal intervention as possible. She looks for quality wineries and cideries using restorative and organic/biodynamic farming practices rather than synthetic fertilizers and pesticides, and herbicides which drain soil of its nutrients.

“I believe that wines which aren’t manipulated give a much better sense of place and terroir in the bottle, as nothing is being added or stripped away in the winemaking process,” says Horvitz. “You really get a pure expression of the fruit and where it’s being grown.”

She takes a novel approach to pairing wines with Oyster Oyster’s plant-centric cuisine, and will offer optional pairings with each meal for $55/person.

“Curating pairings has been really fun because it allows us to be creative to balance the complexity of the dishes and really highlight the season. There aren’t a lot of “classic” rules when it comes to pairing vegetables and wine, as opposed to classic meat pairings (foie and sauternes, or steak and cabernet, for example), so we have a lot of fun tasting together to see what really works to highlight the cooking method and amplify our favorite qualities of the dish.” 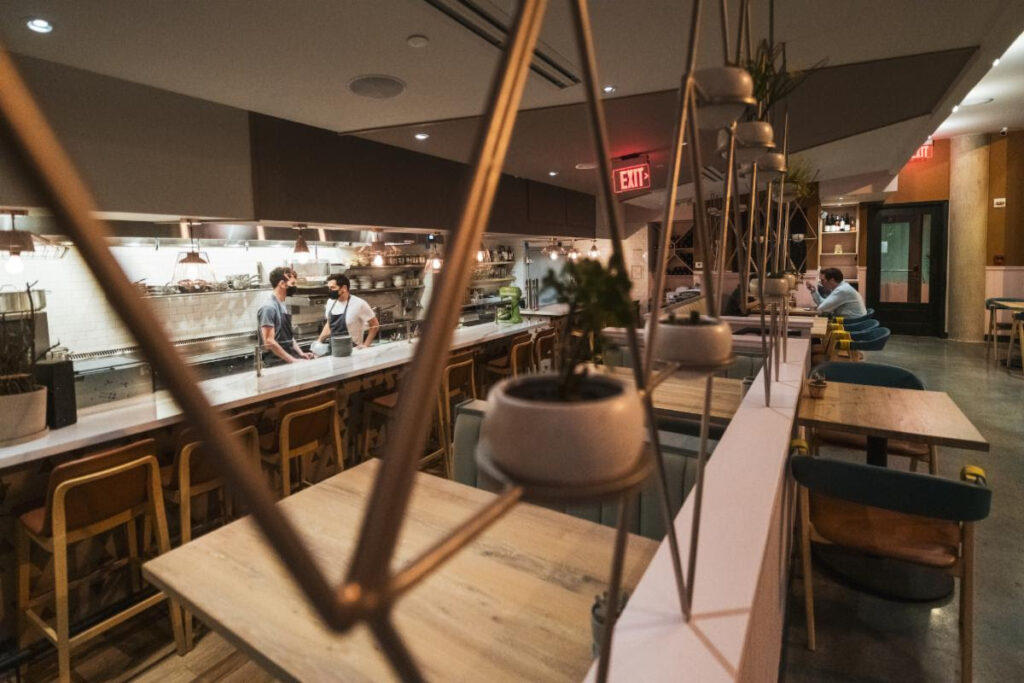 The intimate, 28-seat restaurant is located in Shaw’s City Market at O development, at 1440 8th Street NW. The light-filled, neutral-toned space accented with pink and green hues, is surrounded by large floor-to-ceiling windows. A sunken dining room and attractive booth seating surround the centerpiece of the restaurant – a large open kitchen – providing all tables a view of the action.

The space has been designed by GrizForm Design Architects, who thoughtfully incorporated many sustainable elements into the restaurant’s interior and exterior.

“Sustainability is in Oyster Oyster’s DNA. Everything that goes on the diner’s plate is good for the environment, and we tried to emulate that ethos in the design,” says Griz Dwight, Principal at GrizForm Design Architects. “For example, the front of the outside bar is clad in salvaged skateboard decks, which gives the space some nice depth and character. We also used locally sourced mushroom board on the walls, which gives the space a unique texture, while elegantly tying into the vegetarian theme of the restaurant. Furthermore, the owner [Kuller] spent some time walking the beach in Italy, collecting washed-up beach tiles. Similar to sea glass, their exact provenance is a mystery, but the effect on the wall is beautiful–and sustainable.”

Oyster Oyster will be open Tuesday through Saturday, with seatings from 5pm to 8:30pm. Pre-paid reservations will be required, available via Resy.”

photo by Lee M.. Ed. Note: If any of these was you, please email [email protected]gmail.com so I can put you in touch with OP. “Dear PoPville, I had a missed…