Search
Washington, DC
Air Travel, Federal Government, What the Helen of Troy is This 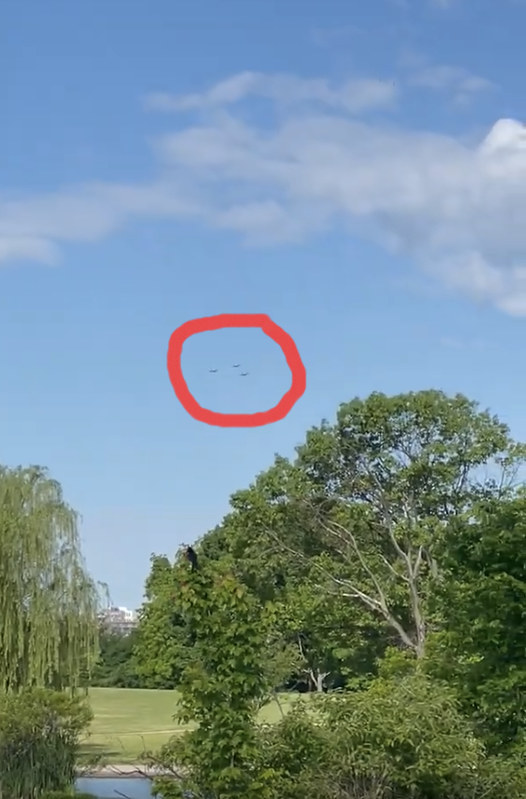 Courtney and others wrote earlier “What is going on with this loud jet that is flying over Glover Park? I hear it but I don’t see it…”

Thanks to Evan for sending the video (you can’t seem them really well but you can definitely hear them):

And in impeccable timing from Congresswoman Eleanor Holmes Norton’s Office:

Congresswoman Eleanor Holmes Norton (D-DC) today released the response she and other Quiet Skies Caucus (QSC) members received from the Federal Aviation Administration (FAA) to their letter regarding the FAA’s Neighborhood Environmental Survey, a nationwide survey about aircraft noise annoyance. Norton declared it a win for District of Columbia residents and the QSC. Norton and Congressman Stephen F. Lynch (D-MA) are co-chairs of the QSC, and Congressman Mike Quigley (IL-05) and Congressman Tom Suozzi (D-NY) are vice chairs.

“The FAA’s concession that, at minimum, they are going to review their current aircraft noise metric means that they have finally acknowledged that it may be flawed when used to determine noise policy,” Norton said. “My colleagues in the QSC and I have long held the position that the current noise metric and significant noise exposure threshold doesn’t accurately reflect the adverse effects that aircraft noise has on households, and the FAA’s response pledging to review it is a victory.”

“The FAA’s willingness to review their current noise metric is a step in the right direction,” said Rep. Lynch. “Communities have been voicing their issues with aircraft noise for years, reporting interrupted sleep, disruption of business and concerns about its impact on young children. It is far past time the FAA acknowledge the widespread problem with aircraft noise and take action to rectify it. We will continue to hold the FAA accountable to ensure they ultimately change the metric that is considered to be significant noise exposure and give all those impacted some much needed relief.”

“I’m glad that FAA agrees with the Quiet Skies Caucus that more thorough review is required to understand the true efficacy of the DNL metric and the 65 DNL threshold in particular,” Rep. Quigley said. “The results of the Neighborhood Environmental Survey demonstrate that FAA needs to go back to the drawing board on much of its aviation noise policy, and I look forward to working with Administrator Dickson and the entire agency to do so.”

The FAA’s response follows below.

Thank you for your March 10 letter, cosigned by your congressional colleagues, regarding the Federal Aviation Administration’s (FAA) nationwide survey on aircraft noise annoyance (“survey”).

The FAA is committed to developing meaningful and equitable solutions to the complex and nuanced issue of aviation noise. We are already taking steps to begin a policy review that builds on our work to advance the scientific understanding of noise impacts as well as the development of analytical tools and technologies. This effort will build on our partnerships with academia, industry, and government to better understand, manage, and reduce the environmental impacts of aviation, including but not limited to noise. We will continue to employ a robust community engagement strategy, rolled out over the last few years, to engage affected communities in discussions on how the airspace is managed. Further, we will work with airports, airlines, and local elected officials on strategies to promote transparency and resolve, as appropriate, additional community concerns. This effort will incorporate the FAA’s updated understanding of aviation noise and human response, so that we are able to promulgate well-reasoned, scientifically-grounded policies. The FAA is acutely aware of community concerns regarding aircraft noise. Our team, in particular those deployed throughout our regions, are deeply engaged on this topic and participate regularly in community engagements, briefings, and reviews of noise complaints. Indeed, many of these FAA team members live and work in these communities. These engagements strengthen the FAA’s understanding of the concerns referred to in your letter.

This letter builds on our response to your September 23, 2020, letter regarding FAA’s April 14, 2020, Report to Congress (“Report”), which describes and evaluates the range of noise metrics the FAA uses for supplemental purposes. While the Report and the survey were undertaken for different purposes and present distinct information, taken together, the findings from each will provide a common understanding of the present state from which the FAA can begin to build a future policy. We agree that progress on aircraft noise will remain elusive in the absence of a thorough and nuanced review of the existing policy. This letter provides additional detail on the process that the FAA is initiating to ensure a comprehensive policy review and development process, and it provides answers to the questions you raised in your March 10 letter in the attachment.

The policy review must be evidence-based. Our January 13, 2021, Federal Register Notice on FAA Aircraft Noise Policy and Research Efforts (86 FR 2722) (“notice”) detailed the FAA’s rigorous and wide-ranging civil aviation noise research program, presented key findings from the survey, and sought input from the public on the survey and other key research initiatives. When the public comment period closed, we began to review the more than 4,100 comments submitted and consider how these comments will inform aircraft noise policy. Where appropriate, the comments will be used to inform the scope of future research activities, including consideration of existing and alternative noise metrics. The notice is one of several early steps that lay the groundwork for a review the FAA’s noise policies.

Regarding next steps, the FAA is continuing to lay additional foundation for the policy review. We are bringing on board the Federal Mediation and Conciliation Service (FMCS) to assist with designing an inclusive and participatory policy review framework and process that prioritizes input from substantially affected stakeholders, including local communities. The FMCS will also facilitate these internal and external stakeholder dialogues. This will not be a short, simple, or superficial undertaking. It will be robust, data-driven, and inclusive. We can provide update briefings as the review gets underway.

From a substance perspective, the review will be thorough, will build on the FAA’s Report, which presented and evaluated alternative noise metrics and their potential suitability in certain circumstances, and will be designed to challenge long-standing assumptions. It will consider new evidence from the survey and the distribution of environmental risks, tradeoffs, or externalities across communities. We expect to review the continued use of the Day-Night Average Sound Level (DNL) as the FAA’s primary noise metric for assessing cumulative aircraft noise exposure. If we determine that DNL will remain the primary noise metric, the FAA will review whether DNL 65dBA should remain the definition of the limit for residential land use compatibility and the significant noise exposure threshold. We also expect to explore whether, and under what circumstances, supplemental or alternative noise metrics are appropriate to inform research and policy considerations. The review process will identify and assess other policy options not noted here, consider feedback on the notice, and, if appropriate, recommend policy updates. All potential policy changes will be carefully considered, including for noise policies beyond aviation. Any proposed changes will require interagency coordination and involve public input opportunities designed with and facilitated by the FMCS.

Finally, we want to emphasize that the survey does not represent a shift in current policy. Rather it demonstrates increased sensitivity to aviation-related noise and heightened annoyance levels. It does not invalidate prior or ongoing project actions subject to FAA funding or approval. The existing significance threshold and use of DNL as an aircraft noise metric will continue to govern FAA project-level reviews until the FAA issues subsequent policy. I look forward to providing additional information as we proceed with all of these efforts.

We have sent an identical letter to each of the cosigners of your letter.

If I can be of further assistance, please contact me or the Office of Government and Industry Affairs.