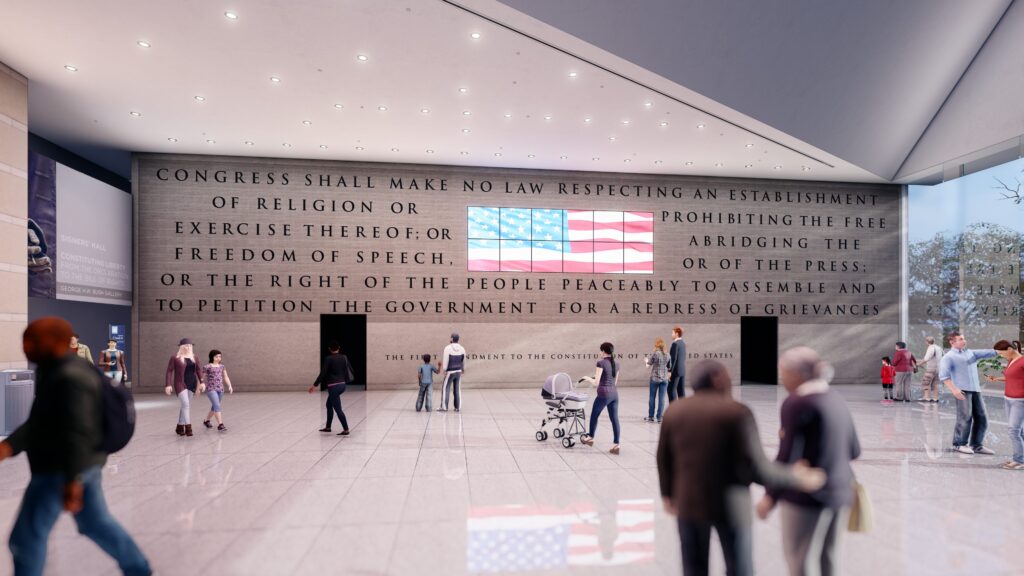 Work has begun to remove the stone pieces from the building, which was sold to Johns Hopkins University after the Newseum closed in 2019. The tablet remained the property of the Freedom Forum, and will be a gift to the National Constitution Center. The tablet will be reconfigured and emplaced along a 100-foot-wide wall on the National Constitution Center’s Grand Hall Overlook, the second-floor atrium overlooking historic Independence Mall.

“We are thrilled to bring this heroic marble tablet of the First Amendment to the National Constitution Center, to inspire visitors from across America and around the world for generations to come,” said National Constitution Center President and CEO Jeffrey Rosen. “It’s so meaningful to bring the text of the First Amendment to Philadelphia, in a majestic space overlooking Independence Hall, where the original Constitution was drafted, as a permanent monument to the five freedoms of speech, press, religion, assembly, and petition.”

“It was important to us to find a location for the tablet where it could be on public display, and where millions of Americans could continue to expand their understanding of and appreciation for our First Amendment freedoms,” said Jan Neuharth, chair and CEO of the Freedom Forum, who recently joined the National Constitution Center Board of Trustees. “We are incredibly pleased that the tablet will have a prominent new home at the National Constitution Center where it can be part of their efforts to increase awareness and understanding of the Constitution.”

The redesign and installation of the tablet at the National Constitution Center is made possible thanks to the generosity of the Honorable J. Michael Luttig and Mrs. Elizabeth A. Luttig. A dedication ceremony will take place in the fall of 2021, which will kick off programming about the First Amendment.

The large tablet of Tennessee pink marble, which was engraved, fabricated, and erected in 2007 at the Newseum’s 555 Pennsylvania Avenue location, will be removed in sections and transported to Philadelphia over several months.”