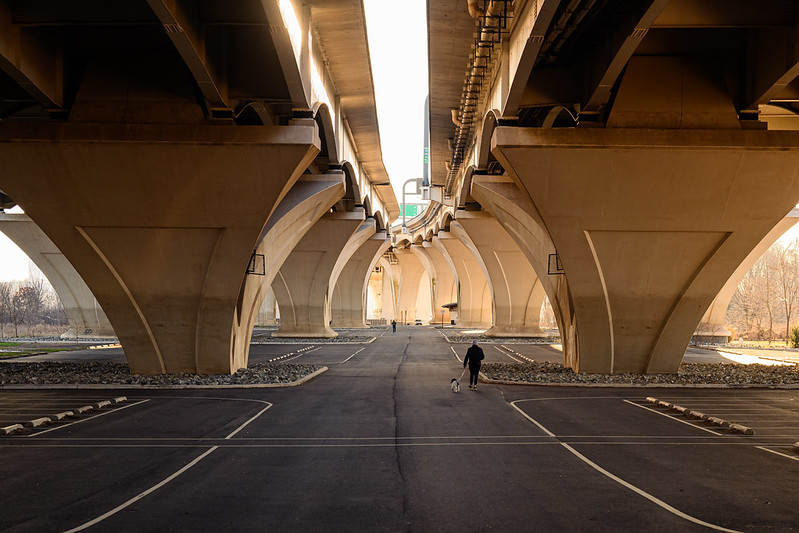 On Saturday March 6th at about 1pm, I had just crossed Chain Bridge when I saw a car with his flashers on and the driver out and using his phone in the Glebe Road approach to the bridge from Virginia. There was a person crumpled in a heap on the ground in front of his car.

I pulled over and threw on my flashers and ran to see if he needed help. As I did, at least four other cars did the same. The young man was a roller blader who had been hurtling down the incredibly steep hill that leads to the bridge and had wiped out. The first driver to stop and call reported that the roller blader had just lost control, and that no car was involved. He wasn’t wearing a helmet and was bloodied from a scrape on his face.

The guy was confused and obviously concussed, but kept insisting he was OK and trying to ride off. He couldn’t answer basic questions about his name or where he was or what had happened. We told him to wait for the ambulance and he became more insistent on leaving, but he was obviously in no shape to leave.

One of the other drivers who stopped turned out to be an ER doc named Paul. We finally persuaded the young man to accept a ride with Paul back to his house in Arlington. As he got in the car, Paul told me he’d try to get him to go to a hospital.

I left the situation in Paul’s hands which were obviously far more qualified than my own. I’d like to recognize Dr. Paul, whose last name I didn’t get I’m afraid, for being a good Samaritan. I’m also happy that which this occurred at a notorious traffic choke point, and there were 4 cars pulled over and obstructing the flow, everyone with the exception of one guy in a black Camero was super polite and patient with us. And given everything we know about the Bystander Effect, it’s great to see that by and large people WILL stop and help a stranger in need.

Aside: It’s terrifying that someone without top notch insurance might try to ride off before an ambulance arrived even if they were compos mentis, since that ride could actually bankrupt you.”